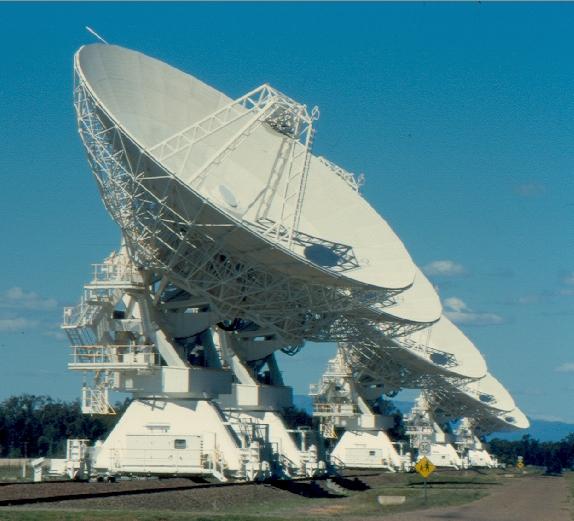 The ATCA is a 6-element radio synthesis telescope located near Narrabri, New South Wales, Australia. It started operating in 1988, after the old Culgoora Radioheliograph, the remnants of which still reside at the same site, had been closed down.

Five antennae can be driven to a large number of stationposts along a 3-km railtrack, while the sixth antenna is in a fixed position a further 3 km from the end of that railtrack. All 6 antennae originally had solid panels in the inner area and perforated panels further out, but in 2000 the 5 antennae on the railtrack were upgraded to completely solid surfaces. The reason for this upgrade is that the 5 antennae on the railtrack can form very compact configurations which are suitable for millimetre interferometric observations. The ATCA is operated in a number of configurations (which are in use for typically 3 weeks at a time) ranging from maximum baselines of 75 meters up to 6 km.

The surface upgrade, the installation of new receiver sets, and the installation of a nothern spur now allow the ATCA to operate not only from 3 cm to 90 cm, as before, but towards shorter wavelengths of 12 and even 3 mm, while at the same time achieving good imaging of the sky in a shorter amount of time.

There is now an ATCA photo gallery.