Holography of a radio telescope is an efficient technique of antenna metrology by raster-scanning across a pointlike source emitting a narrow emission line (a "beacon") and comparing these observations with those of a second reference antenna pointing straight at the point source. The beacon can be either an astronomical source, if strong enough, or for example a satellite beacon (on a geo-stationary satellite). Runtime differences of an incoming wavefront compared to the expected pattern for a perfect paraboloid can be measured and converted into values describing the misalignment of parts of the antenna optics. In the special case that the receiver is on-axis and in-focus and the subreflector is perfectly shaped and aligned (all of which can be measured as part of a holography run), phase offsets measured in holographic measurements of the Compact Array antennas reflect offsets of the primary reflector panels.

The aperture distribution of an antenna is measured by imaging its complex beam pattern and taking its Fourier transform. Thus, when producing a raster scan of a region of the sky containing a beacon point source, the raster scan is not used to reconstruct the emission distribution on the sky, but instead - using the known emission distribution, namely that of a point source - to map its beam and use that to calculate deviations from an optimal optical assembly. The sampling interval is determined by the antenna diameter, D, and chosen to be about one antenna beamwith, i.e. Δθ ∼ λ/D. External effects (phase drifts, phase wabble due to atmospheric turbulence etc.) are taken into account by measuring phases relative to those of a reference antenna that always points straight at the beacon. This technique is called "phase coherent holography".

One will want the observing frequency for antenna holography to be close to the highest astronomical observing frequency. On the other hand, the frequency should also be well-matched with the actual antenna surface quality (if the deviations are too large compared to the observing frequency/wavelength there will be phase wraps). If large deviations are expected to be present, it might be necessary to either perform to consecutive holographic runs, the first at a lower frequency than the second, or one would perform a first round of antenna surface corrections based on another method (e.g. using a theodolite). Based on these considerations, and also on the availability of a suitable beacon signal (a beacon onboard the Optus-B3 communications satellite), holography at the ATCA is performed at a frequency of 30 GHz.

Like in the case of the Atmospheric Seeing Monitor (ASM) two antennas are used. One serves as a reference, the other obtains measurements from which the reference values from the former are subtracted.

However, there are significant differences in the instrumental setups. While in the case of the ASM dedicated small antennas are used and both are fixed in one position, for holography one of the ATCA antennas (the reference antenna) will normally track the astronomical source or the orbit of the satellite with the beacon during the entire observing run (for which one requires up-to-date satellite ephemerides), while the other (the ATCA antenna whose surface is to be measured), will produce a raster scan centred on the beacon target.

ATNF Narrabri has two 30 GHz receivers for use in holography. They are used with spare 3/6 cm feedhorns in the focus of the antenna to be measured and of the second reference antenna. A photo of a 30 GHz holography receiver is displayed below. These receivers are also used as part of the ASM. 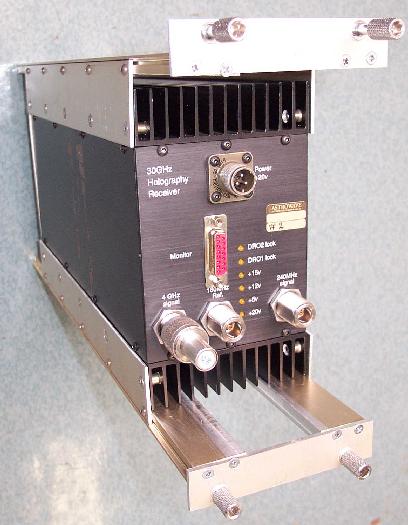 Photo of an ATCA 30 GHz holography receiver. After down-conversion the output signal is transmitted at an intermediate frequency of 240 MHz. A 160 MHz LO signal is provided by a high-quality synthesiser (click on image for larger version).

The electronics for holographic measurements of ATCA antennas (and the Atmospheric Seeing Monitor) is mounted on one rack, which is a mobile unit. Normally during a holography run the rack will be removed from the Narrabri screened room and be placed in the pedestal room of one of the two antennas participating in the holography observations.

The incoming signals from the two antennas, at an intermediate frequency of 240 MHz, are transported from the holography receivers via low-loss coaxial cables to the holography rack and the signals are phase-locked for the duration of the observations. The two lock-in amplifiers are the units with the red LED displays. The bandwidth used is 50 kHz, typically. The synthesiser used to create the 160 MHz LO signal is visible at the bottom of the rack. Sitting ontop of it one can see an interface connecting the holography rack with the PC ontop of the rack, which normally stores the data (if used as part of the ASM). 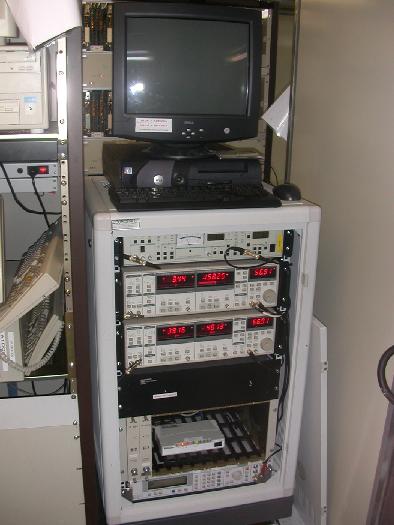 Holography rack developed by ATNF, which is used for both antenna holography and as the backend of the Narrabri Atmospheric Seeing Monitor. Here it is displayed in its function as the ASM backend, inside the screened room at Narrabri.

The fact that there is a dedicated holography backend indicates that for such observations the ATCA correlator is not used. Neither is the standard ATCA observing software (CAOBS) used, but instead customised software developed by M. Kesteven.

A comparison of the optics of an ATCA antenna before and after surface panel adjustments is shown on the page on ATCA antenna surface accuracy.

As described there, the phase information from holography data can be used to determine (once other potential sources of error, such as misalignment of the subreflector, have been corrected) the shape of the primary mirror surface. The amplitude information is used to measure the antenna illumination, which one wants to be as homogeneous as possible.

The resolution of a holography antenna image, Δs, depends on the size of the raster pattern. The more raster points, N, observed, the higher the resolution of a holography image. The relevant formula is Δs ∼ D/N, where D is the diameter of the antenna. There are practical limits to the size of N (both signal-to-noise related and in terms of the amount of time required to complete an observation). For the ATCA antennas 85x85 point raster maps are created, which offer a spatial resolution, Δs, at the surface of the primary mirror of order 25 cm. For a set of images click here.

Because the 30 GHz receivers and the holography rack are all used as part of both the holography setup (see above) and the ASM, the latter is not available while holography measurements are conducted (which is not an operational concern, because there will be no science observations, and thus weather decisions, while the antenna surfaces are being readjusted).

A very nice article on "Microwave Holography for Antenna Metrology" by M. Kesteven, which goes into more detail than this general description, can be found in the Journal of Electrical and Electronics Engineering, Australia, 14(2), 1994, p. 85-98 (unfortunately not available online).