The required surface accuracy of an astronomical telescope depends mainly on the wavelength of the radiation one wants to collect with it.

A telescope's large-scale shape must be optimal so as to obtain focused images of the sky. The most conventional mirror shape in use is the paraboloid. Incoming parallel rays of light will be focused by a paraboloid into a single point, see figure below. 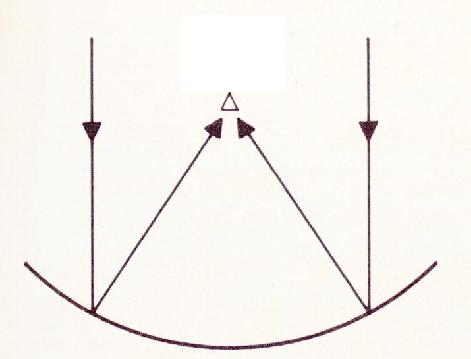 Sketch of a parabolic mirror reflecting light into its focal point.

The micro-roughness of a mirror determines whether it actually reflects (almost) all incoming light or only a certain fraction of it (while the rest strays into different directions). Normally the average deviation of a mirror's surface from its perfect shape (normally paraboloid) should not exceed 1/50 of the wavelength that is observed with it. This constraint can possibly be relaxed to 1/30 or 1/20, if one is willing to live with certain losses. This general concept can be found back in the individual examples listed below.

Examples (from coarse to fine)

A telescope used to collect 4-m wavelength (radio) waves can then be built with a wire mesh resembling chicken wire, with a mesh size of around 20 cm. Such telescopes were used in the Culgoora Radio Heliograph. This illustrates the fact that radio telescopes with chicken wire as their reflecting surfaces are in fact mirrors, although this might not be apparent upon first glance.

Radio telescopes operating in the centimetre regime require surface accuracies somewhere in the millimetre ballpark. As an example, one might consider the Parkes 64-m Telescope.

When operating in the millimetre regime, the surfaces of radio telescopes already start to resemble those of optical mirrors, as can be seen in pictures of the Plateau de Bure Interferometer. Note that some mm telescopes are coated with reflective paint, which makes them less shiny, but their surface accuracy is still the same (ATCA, Pico Veleta).

Infra-red telescopes go one step further in surface quality, although they do not necessarily have to be of the same quality as optical mirrors. The important transition from (sub-)mm radio telescopes to the infra-red (IR) regime is that, while radio telescopes normally have metal surfaces, IR telescopes use glass mirrors (e.g. aluminium-coated Cerodur).

Aluminium-coated glass mirrors as used in optical telescopes will by far exceed the reflecting quality of any household mirror. The largest optical mirrors these days (2005) measure about 8 m (Very Large Telescope; single mirrors), and even up to 10 m (Keck Telescopes [external link], made of mirror segments).

The step from an optical to an ultra-violet (UV) telescope mirror is not big, because the wavelengths differ by only a factor of 2 or so.

However, moving on to yet shorter wavelengths, namely X-ray radiation, mirrors must become yet more precise, requiring gold (or similar) coating. In addition, X-ray light cannot just be reflected back in the same way as optical light. Instead, it is deflected at small angles ("grazing incidence"). An example of an X-ray mirror assembly (of the XMM-Newton satellite's telescopes) is displayed below.

Sketch of a cut-open XMM-Newton X-ray telescope (courtesy of the XMM-Newton Science Operations Centre, reproduced from the XMM-Newton User's Handbook; click on image for larger version)

The sketch above shows how in practise an X-ray telescope does not only consist of a parabolic mirror assembly, but - in order to shorten the focal length of the telescope - a second, hyperbolic mirror assembly behind the paraboloids. Note that for small reflection angles the mirrors are in the form of shells. So as not to block most of the aperture of the telescope, these mirror shells are produced as thin as possible.

Thin mirror shells have the disadvantage of having some large-scale deviations from a perfect shape. The most accurate mirrors in use in astronomy these days are mounted onboard the Chandra X-ray satellite. They have a micro-roughness similar to those of the XMM-Newton satellite's, but they are thicker, which reduces their large-scale deformations, enabling them to obtain more sharply focused images (at the cost of blocking more of the entrance aperture, i.e. receiving less light for a given telescope diameter).