Similar to the radio waveband, the infrared band is very wide, which means that a large number of different radiation processes are observed in it. In the so-called near-infrared (NIR) regime, from 1 micrometer to approximately 5 micrometer wavelength, continuum emission from stars is observed, while the line emission comes from interstellar gas. In the mid- to far-infrared regime (MIR and FIR, respectively), line emission from gas is still observed, while most of the continuum radiation comes from dust of various temperatures. As visible in the diagram of the atmospheric transmission some parts of the NIR and MIR spectrum are accessible from the ground, while starting in the MIR regime and into the FIR regime observations must be conducted from space.

From a technical point of view, infrared astronomy is possibly the most difficult waveband to deal with, because equipment at room temperature (300 degrees Kelvin) itself is an infrared emitter. This makes is very hard to obtain high-quality data free of instrumental effects.

Pioneering work in the FIR regime was performed by the Infra-Red Astronomical Satellite (IRAS), which produced an all-sky survey in four bands. More details, also of other observatories working in the IR band, are provided on the page about IR astronomical observatories.

Again, as in other wavebands, there are too many applications of infrared observations for all to be mentioned here. Therefore, I will restrict the range of examples presented here to studies of nearby galaxies. And again, first a look at some important emission lines is presented, before continuing to the continuum emission processes.

Most emission lines in the infrared, with typical energies of tenths of an electron Volt (eV), arise from transitions of rotational or spin states of atoms or molecules.

The carbon [C II] 158 micrometer line and a number of other mid- to far-infrared emission lines from elements such as carbon, nitrogen and oxygen (in various ionisation stages) are called "cooling lines". They arise from elements that are either very efficient absorbers of stellar ultraviolet radiation or get excited via collisions. By absorbing the energetic UV radiation or the collisional energy and then re-radiating it again efficiently at lower energies, these elements cool the ambient medium; thus their name.

This line transition of singly ionised iron is considered an important cooling line of gas that is not heated by UV radiation or subsonic collisons, but instead predominantly by shocks (i.e. supersonic collisions in a gas). It is a direct tracer of supernova remnants, which are the gas shells ejected by imploding massive stars. Therefore, the [Fe II] 1.64 micrometer line (which is in the near-infrared waveband) is a very good tracer of gas shocked by energetic events associated with massive stars, in particular in the central regions of galaxies.

Other important near-infrared lines are found at 2.17 micrometers (atomic hydrogen recombination line), and at 2.12 micrometers (a transition of molecular hydrogen; H2) - and there are many more. Since the three near-infrared lines mentioned here are excited via different mechanisms, measurements of their relative strengths can tell us which excitation mechanism dominates an objects energy input. Such investigations are performed with the help of near-infrared spectroscopy. Show example spectrum here? A relatively strong [Fe II] line indicates the predominance of shocks as the heating source of the line-emitting gas.

The two figures below display infrared spectra of the starburst galaxy M82. The first figure presents spectra taken towards different actively star-forming regions in the central disk of M82, with many line identifications. One can see how different regions have different spectral characteristics, which tell us a lot about the excitation that the gas is undergoing. In the figure below, the continuation of the emission from M82 towards the mid-infrared regime is shown, again with line identifications. Here a lot more underlying continuum is also clearly discernible, in addition to the lines. Both figures are from Förster Schreiber et al., Astrophys. J. (2001).

Stars cooler than the Sun emit the maximum of their radiation in the near-infrared regime. Since massive stars, which have high luminosities, have only short lifetimes, the total emission of a galaxy as a whole is often dominated by cooler, more long-lived stellar types. These one picks up in near-infrared images, such as those provided by the so-called 2-Micron All-Sky Survey (2MASS). An example is displayed below. 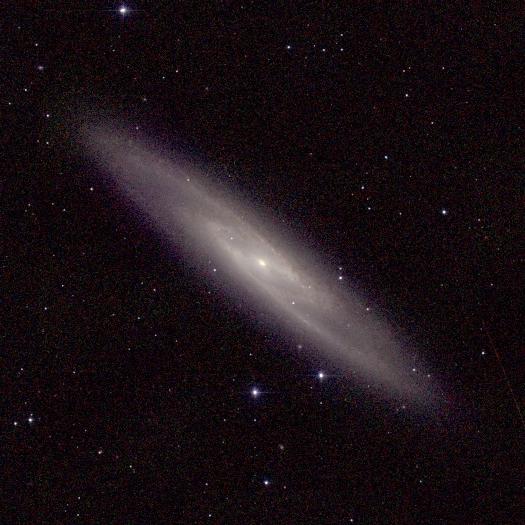 A comparison with the colour image of the impressive barred galaxy NGC 253 (above; retrieved from the online 2MASS) extended target image server with an optical continuum image shows how much less of a role obscuring dust plays in the near-infrared band. One can see clearly the barred stellar distribution that is obscured in optical images. 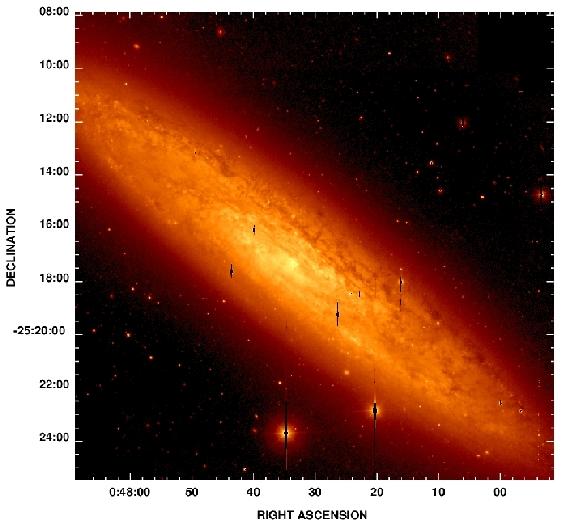 At longer wavelengths, in the mid- to far-infrared waveband, another continuum emission process dominates, namely continuum arising from dust grains heated by their ambient medium.

Typically, continuum and line emission combined, galaxies emit around 10000 times as much energy in the far-infrared waveband as in any other - this is a handy measure of the efficiency of the cooling processes occurring in this wavelength regime.