It is not a chance coincidence that I describe as the major areas of research in other wavebands mostly investigations of the interstellar medium (i.e., gas). Stars like the Sun emit the maximum of their emission in the optical domain and therefore stellar astronomy is most important in the optical. Stars cooler than the Sun emit in the near-infrared waveband, stars hotter than the Sun predominantly in the ultraviolet regime. Observations in the optical waveband are conducted by specialised optical observatories.

This does not suggest in any way that there is nothing to learn about the Sun and other stars in other wavebands; the point is that stellar research does not dominate the research in these bands as it does in the optical. Still, the widest range of different investigations is carried out in the optical. It is the waveband in which we have by far the longest observing history and also most experience, while in the wavebands opened only recently by satellite technology we are still on the steep part of the learning curve.

Because of the diversity of research areas making use of optical observations, it is impossible for me to mention them all here, even by giving just short examples. There are just too many! They range from the Moon to the most distant objects known, i.e. quasars (quasi-stellar objects) at redshifts of 6 or higher (which corresponds to lookback times in the Universe of a significant fraction of its total age!).

Therefore, it is best for me to concentrate on something that I am a bit familiar with and to describe some research done on external galaxies based on optical data. Some examples are available in the picture gallery, namely the Hα images of galaxies displayed there. There are more such images on the page describing the warm ionised medium in galaxies. These are all images of gas in nearby galaxies. Just for the sake of clarity: There are lots more very important diagnostic emission lines that are used by astronomers to gain a handle on the properties of ionised gas in galaxies, in addition to the hydrogen Hα line. Examples are the Hβ, [N II], [S II] and [O III] lines, to name but a few. As said above, there is also a lot of optical information on stars to be gained, not just gas.

One example of this is the picture below of the edge-on galaxy NGC 891. In its disk one can see blueish stars shining through gaps in its dust layers, while most emission from the disk is reddened by that dust. 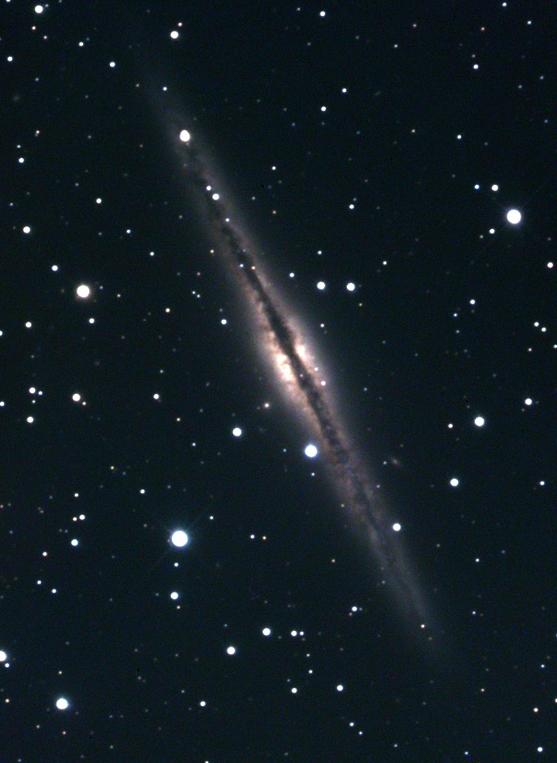 Or have a look at the edge-on starburst galaxy M82 in the next picture. This is the same galaxy whose gaseous emission distribution looks, on a larger scale, like this. 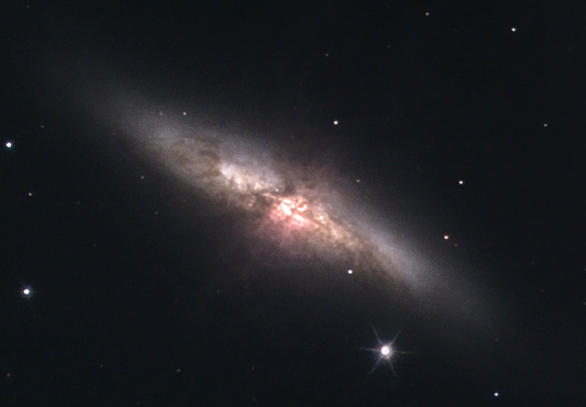 This is a branch of astronomy that amateurs can take part in quite routinely, with affordable high-performance commercial Charge-Coupled Devices (CCD cameras) on the market. This leads to a new era in the area of astrophotography (see e.g. links provided there). Search machines will list plenty more such outstanding amateur astronomers' websites.

It is obvious that sometimes one takes two exposures of appealing objects such as the galaxies displayed above. This is how some supernova explosions and other cosmic events were also detected first by amateur astronomers, before the pros could react.

Looking deep into the Universe

At much larger distances galaxies have very pronounced colour differences. Images like this help us investigate galaxies as they were a long time ago. Already their colours, but even more so follow-up spectroscopic observations tell us that galaxies a few billion years ago (and the stellar populations therein) were different from what we see at the current epoch. In the meantime they have undergone substantial evolution. Just one interesting aspect of this is that at earlier times the volume of the Universe was smaller than now, therefore the density of galaxies in a given volume was higher, which led to more galaxy interactions and thus more disturbed systems than at the present time.

Another example for a key research project based on Hubble Space Telescope (HST) optical observations of stars in external galaxies is the measurement of the extragalactic distance scale, and thus the so-called "Hubble constant, Ho" (which, in fact, is not a constant at all). This project has finally led to a significant improvement of our distance measurements out to about 25 Mpc (75 million light years). The earlier uncertainty by a factor of 2 in the distances to external galaxies led to potential errors in our estimates of key properties such as their total luminosities of a factor of 4, which was clearly not acceptable.