The radio regime is probably our most important observational window on various types of gases and in particular electrically charged gases, so-called "plasmas". Therefore, emission processes described here will concentrate on investigations of interstellar matter.

One enormous advantage of radio waves is that in a lot of cases they can penetrate extremely deep through intervening matter. In fact, there are examples of objects observed in radio emission right through another galaxy -- and not just a galaxy that we see face-on, no, one like NGC 7090, which we view edge-on. The radio light of a background object can in principle traverse 100000 light years of galaxy and still continue to be observed by us! This is quite different compared to optical light, which is absorbed so efficiently by dust that within our own galaxy (even close to us) there are regions that we just cannot see.

One of the most important radiation processes used in astronomy is the line emission emitted by Hydrogen atoms when the relative orientation of the spin of their electron and proton with respect to each other changes. This is the so-called "HI line", famous for its diagnostic power. It has taught us a lot about how objects move (i.e., their internal kinematics, like for example the rotation pattern of the Milky Way galaxy), but also about the large-scale structure of the Universe around us. A few examples will follow below.

Let me proceed systematically and first deal with a couple of important emission lines in the radio regime (including the HI line), before continuing on to the most important radio continuum emission processes.

The HI line of neutral hydrogen

The above-mentioned HI line has a wavelength of 21 cm, corresponding to a frequency of 1420 MHz. It provides us with crucial information about our own Galaxy and others as well. We have not only learned the distribution of neutral atomic hydrogen gas, but also how it moves and thus how a galaxy rotates. 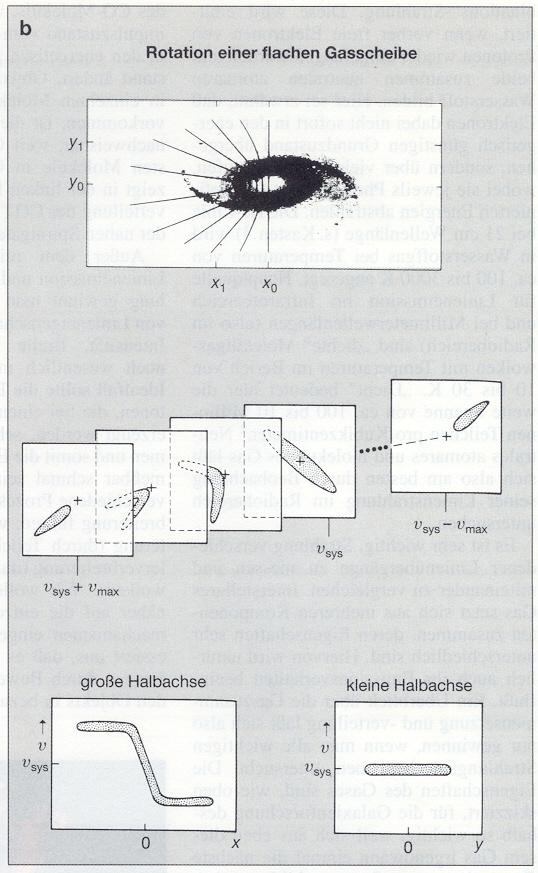 The sketch above illustrates what we see of a rotating galaxy by measuring HI line emission in several consecutive narrow frequency bands. We basically chop up the galaxy disk into areas that move at the same speed with respect to us (sorry for the German labels...). A real such measurement is presented below, of the Andromeda galaxy (our nearest big spiral companion galaxy). The intensity of the HI line emission is coded as brightness, while the mean velocity, at which the gas at a certain point moves, is coded in colours. The result is a neat rotating gas ring (image courtesy of E. Brinks). 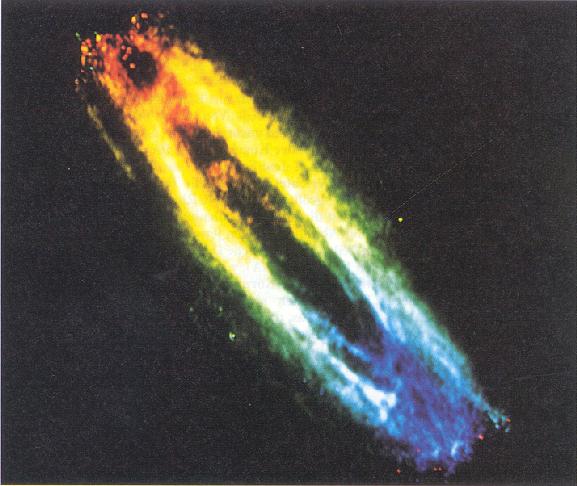 Another application of the HI line are, for example, studies of gaseous shells that are displaced by explosive events, like supernova explosions of massive stars at the end of their lifetime. The example below shows that we can image the almost circular structure of this particular shell, but the kinematic information that was obtained at the same time (by measuring the Doppler redshift of the emission line from the different lines of sight to the object), we can also determine its expansive motion (see figure below). 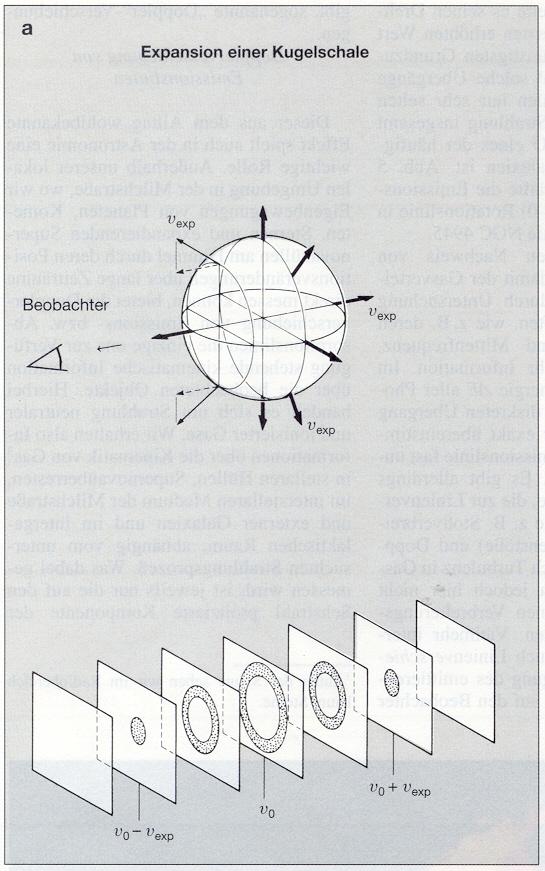 The motions here (or, as a consequence, the emission distributions in the narrow-band observing channels) are obviously completely different from those of a rotating disk, as displayed above. Thereby, such observations also allow us to distinguish between different classes of objects, if their true nature should not be known before.

On a much larger scale, HI line observations allow us to study the relative motions of galaxies in groups or clusters. Numerical models use such data as input parameters to determine the paths galaxies have taken passing by each other in the past. A critical piece of information provided by HI line data are the observed disturbances of the gas, without which no information on the trajectories of the galaxies involved in interactions could be deduced.

The C and O atoms in a carbon-monoxide (CO) molecule are not completely fixed in their positions with respect to each other. There are several possible rotational motions, between which transitions are possible. The transition from the first excited level to the ground level, called the CO(1-0) line, has a wavelength of 2.6 mm, corresponding to a frequency of 115 GHz.

This transition and the light emitted by it is the most important diagnostic tool to study relatively dense molecular gas in clouds (i.e., the kind of gas from which stars are formed). This means that it provides different information than the HI line, which traces more diffuse gas in a different energy state. A typical example of a CO observation of an external galaxy is shown below. CO gas is very closely associated with the stellar spiral arms, which makes it a good diagnostic tool for investigations of the (potential) birthsites of stars. As an example the distribution of CO gas in the galaxy M51 (the "Whirlpool Galaxy") is shown below.

The above are only prominent examples for the use of these lines. Many more are used and provide a lot more information.

As one can imagine, many more diagnostically important lines also exist that cannot be described here. What is important to know is that different lines are used to either obtain different pieces of information (like imaging different types of gas at various temperatures) or to independently corroborate results obtained from other observations. This is a general tactics in astronomy. Independent confirmations of results are always sought, because we cannot go to the objects under study to verify right there whether we have been right or wrong...

Supernovae produce, alongside a lot of hot gas, also a population of relativistic particles (i.e., particles that travel at velocities close to the speed of light). These particles are called "cosmic rays", which indicates that one can describe them as particles in the conventional sense or as waves. Under the name cosmic rays one groups all such relativistic remnants of destroyed atoms, namely protons or light atomic cores and the electrons that have been separated from them. What we observe in the radio regime are relativistic electrons. As described elsewhere, these are forced to emit photons (at radio wavelengths) while spiralling in magnetic fields.

This is the dominant emission process within galaxies at wavelengths of tens of centimeters. Therefore, all radio continuum images of galaxies shown in the picture gallery are examples of radio synchrotron emission. Or maybe have a look at the synchrotron radio emission of NGC 7090.

Thermal radio emission comes from warm interstellar gas (with temperatures of around 10000 K). Radio photons are emission from the so-called "Rayleigh-Jeans arm" of the 10000 K Planck spectrum emitted by such plasmas. The same kind of plasma can be observed in other emission processes, most prominently the so-called Hα hydrogen recombination line (explained in the section on optical astronomy).

Thermal plasmas in external galaxies are very hard to observe. First of all because their radio emission is very faint, secondly because thermal emission is almost always mixed with synchrotron radiation. This mixture makes it very difficult to decide which amount of the observed emission is of nonthermal or thermal origin. Some assumptions must be made and then a model created of how to subdivide the observed radiation. Therefore, even in cases where images of the thermal emission distribution in the decimeter wavelength range are available, their provenance is very complicated.

However, in the mm wavelength regime one can actually observe some quite "clean" thermal emission, without too many other emission processes disturbing the observations: Dust emits radio continuum photons in this wavelength regime. One example of such an observation is the 1.2 mm continuum image of the central part of the actively star-forming galaxy M82 reproduced below (image courtesy of Thuma et al. [2000, Astron. & Astroph.]).

Observations as described above are carried out with various types of radio telescopes.