X-ray astronomy is still a young discipline, because observations are possible only from outside the Earth's atmosphere. The first rocket-based X-ray observations were conducted in 1961 by R. Giacconi.

X-rays are emitted by very energetic processes in the vicinity of compact objects, such as for example black holes, and in hot ionised gases (plasmas). As in all other wavebands, both line and continuum emission is observed. And as always, both are normally observed simultaneously. Each photon carries an energy equivalent to about 1000 to 100000 optical photons. Below a summary of the most important processes producing both kinds of radiation. As we will see below, X-ray photons are produced by some celestial objects that cannot be studied in other wavebands. Therefore, although an enormous effort must be made to facilitate such observations, it is generally agreed (well, at least by astronomers...) that the results justify the means.

One can imagine that, when atoms lose so many of their electrons that they are almost completely ionised, there is an enormous number of possible energy transitions leading to line emission (when electrons are recaptured or, within an atom, undergo a change of state; see section on fundamental radiation processes). Highly ionised atoms produce transitions that set free large amounts of energy, leading to an abundance of emission lines in the so-called soft X-ray regime (0.1 to 2 keV energy). Relative line strengths can be used to get a handle on the relative abundances of the elements emitting them, and thereby on the chemical composition of hot ionised gas ("plasma") from which the X-ray radiation emanates.

Although the largest number of (important diagnostic) X-ray emission lines is observed in the energy band from 0.1 to 2 keV, the single most important X-ray emission line, the so-called Fe Kα line, is observed at a higher energy yet. It arises from an energy transition of electrons in iron atoms that are up to 26 times ionized, which means that they have lost up to 26 of their electrons; see figure below. 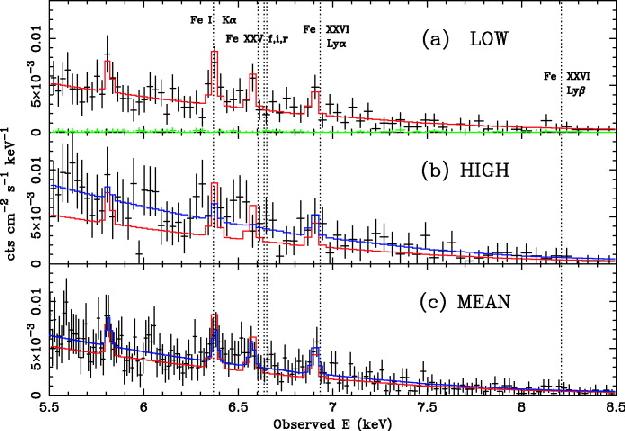 The figure above (courtesy of T. Yaqoob et al., 2003, Astrophys. J.) displays as an example part of an X-ray spectrum observed by the Chandra satellite, with a best-fitting model superimposed on it. This emission arises from the central active galactic nucleus (AGN) of the spiral galaxy NGC 7314. Only the energy range from 5.5 to 8.5 keV is shown. In it various X-ray emission lines from iron atoms in various ionisation stages are visible (see labels in the figure). The line marked as "Fe I Kα" is the recombination line of multiply (23-25 times) ionised iron.

In addition to the Fe Kα line, other line transitions can be seen in this energy range, such as the thermal emission line of Fe XXV (i.e. 24 times ionised Fe) near 6.7 keV energy and a second Fe XXVI recombination line near 7 keV. In the figure the authors show that the line intensities of NGC 7314 vary with time, plotting a "high" and "low" energy state as well as the mean. 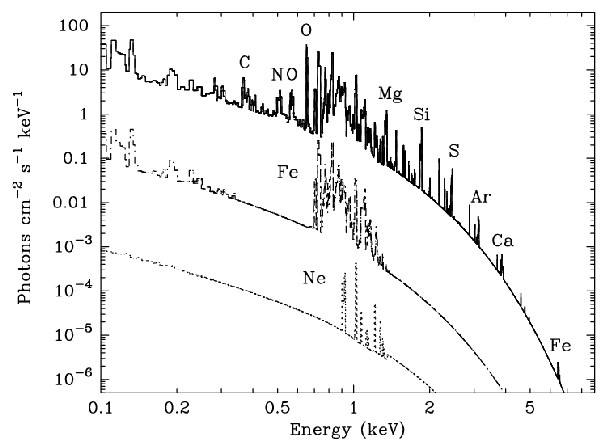 A model of the emission of a highly ionised hot gaseous medium is displayed above. Expected emission lines of various elements are marked (figure from Weaver et al. 2000, Astrophys. J.).

Hot plasmas do not only emit photons with well-defined energy values from transitions between quantised properties of particles, but such a medium is also very turbulent and thus collisional excitation can also occur. In this case, a continuum of emission is produced. This continuum underlies the emission lines introduced above.

The "bump" in the model X-ray spectrum is thus actually continuum emission (part of the black body spectrum of a plasma with a temperature of several million Kelvin). This is then an example for thermal X-ray continuum emission. Another example for such a medium could be the hot corona of the Sun, which also has a temperature of millions degree Kelvin (and therefore is an X-ray emitter).

Near supermassive objects a different kind of X-ray emission is produced. Particles are accelerated to relativistic speeds and accretion of matter onto the central massive object takes place. The resulting X-ray emission is in this case not a measure of the temperature of the source. Instead, the continuum shows a so-called "power law" slope, which is typical of nonthermal emitters. In the figure above (on a logarithmic scale), such a power law shows up as a straight slope, on the high-energy side of the spectrum.

Compact objects often emit time-variable radiation. Since X-rays are normally emitted very close to compact objects, their time variability can tell us a lot about their immediate surroundings. Variability studies in the X-ray regime are therefore more important than at most other wavelengths.

One example of such a variability study is the investigation of the emission from an outburst in an accreting binary star system. An outburst of emission is observed when a "chunk" of mass is accreted onto the surface of the primary star of the binary system. Normally one observes an exponential decay in surface brightness in such events. In the case of the source RE J1255+266 the decay time was approximately one day (see figure above; from Dahlem et al. 1995, Astron. & Astroph.).

As in other wavebands, absorption of radiation is also a valuable diagnostic tool in the X-ray regime. In the figure below the starburst galaxy NGC 4666 is shown, as seen by the XMM-Newton satellite at energies ranging from 0.2 to 0.5 keV. Overlaid on a grey-scale optical image of the galaxy contours of equal X-ray brightness are displayed. One can see a depression of X-ray emission on the south-east (lower left) side of the galaxy disk, which is caused by absorption of X-rays by the galaxy disk's neutral gaseous medium. 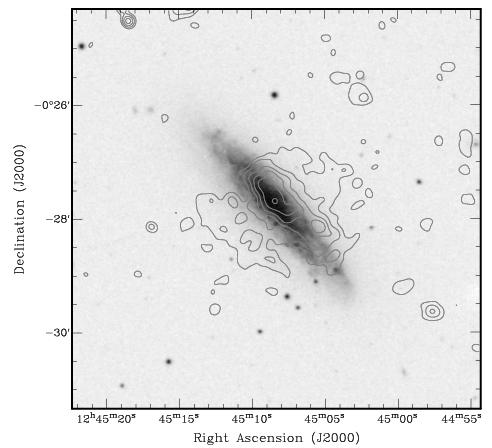 The same was also found in another edge-on galaxy, NGC 253, by W. Pietsch and collaborators, using ROSAT observations. The overlay below displays contours of equal 0.1-0.4 keV soft X-ray emission ontop of an optical image; this figure is reproduced courtesy of W. Pietsch (1996). Note how the neutral gas on the front side of the galaxy "cuts" out part of the X-ray emission coming from behind, to leave a band across the optical image where no such emission is detected.