The technique of measuring the properties of "polarised" electromagnetic radiation is called polarimetry. There are plenty of web pages around describing polarised light, so I will keep my description of the basics short here. This section is sub-structured into:

What is polarised light?

Let us consider the two ways of describing light again. One can describe light as consisting of particles, the so-called "photons", or as electromagnetic waves. Here, in the context of polarisation properties, it is definitely easiest to look at light as being in the form of waves. Light waves can be thought of as sinusoidal oscillations as shown in the sketch below.

Light coming from the sun (and other light sources, such as light bulbs) can have any arbitrary oscillation angles so that when many such waves are observed, there is no visible preferred oscillation direction, just random osciallations. There not being a preferred oscillation direction is what we call "unpolarised" light. Because sunlight is unpolarised, we did not develop the skills to detect polarised light. Therefore, in everyday life, although there is polarised light, we don't normally notice, because our eyes are not equipped to detect preferences in the osciallation properties of light waves.

On the other hand, if for some reason (see below) light does have a preferred oscillation direction, it is "polarised". The light emitted by fluorescent light bulbs, for example, is polarised. 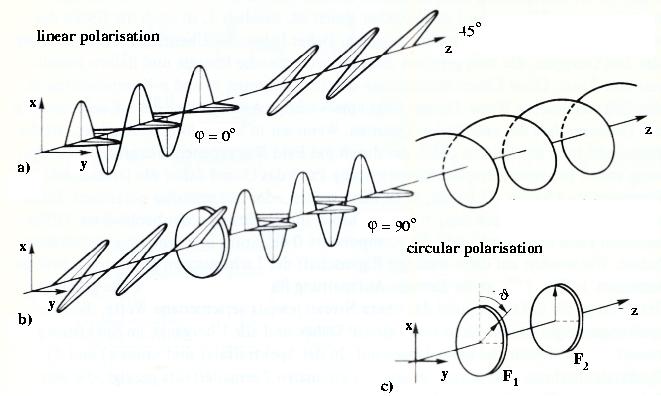 a) If a wave can be disected into two orthogonal components that have no offset with respect to each other along the z-axis, the wave is called "linearly polarised", as shown in the upper left graph. In this example the wave vector has an oscillation angle, in the (x,y) reference frame, of 45 degrees. The z-axis is the direction in which the light wave propagates. b) The central panel illustrates how, if the y-component of a wave is delayed with respect to the x-component (in this case by 90 degrees), oscillations do not remain in one plane, but the oscillation vector describes a helical pattern. One can recreate the helix by following the peak points of the two sinusoidal components and connecting them with each other. This kind of radiation is called "circularly polarised".

How is polarised light created?

A few processes can lead to the creation of polarised waves. Three of these processes are listed below.

While spiralling around magnetic field lines, electrons obviously do not move on a straight line, as one would expect if they could travel through space without external influences. Magnetic fields force them onto curved orbits, which implies accelerated motion. While undergoing accelerations (or decelerations - in general, any kind of deviation from constant, unimpeded flight), electrons interact with their environment (the magnetic field), during which process they emit radiation. In astronomical objects this radiation is normally emitted at radio wavelengths. Electrons traveling at velocities close to the speed of light, called "relativistic" electrons, emit radiation preferably in the direction of their motion. This leads to so-called "synchrotron emission", which is highly polarised, i.e. it has oscillation vectors primarily perpendicular to the direction of the magnetic field forcing the electrons onto their helical orbits.

Polarisation by reflection of light

When light hits a surface such as a metallic mirror, light waves with random orientations of their oscillation vectors are not all reflected. Waves with oscillation vectors parallel to the surface are predominantly absorbed, while waves with vectors perpendicular to the surface are mostly reflected. The contrast between these two cases is most pronounced, if light impinges on a surface at the so-called "Brewster" angle (which is a characteristic of the surface material or, more precisely, of its light refraction index).

There are many web pages describing this effect and how to set up an experiment to demonstrate it. In astronomy this effect is very important, because almost all telescopes these days are reflectors, which alter the polarisation properties of the incoming light. Therefore, the intrinsic polarisation characteristics of telescopes must be measured and corrected for before one can make any statements about the polarisation properties of light coming from celestial sources.

Polarisation due to scattering

Scattering can be viewed as a special case of reflection. Light can hit particles, such as e.g. dust grains in the interstellar medium, and be reflected by them. The reflected waves can be polarised, especially if the dust grains are aligned along magnetic field lines (which is often the case). This is not called reflection, since there is a random component involved, because the dust grains do not act exactly like a reflecting surface, such as a mirror.

One can roughly visualise this scenario by assuming that in the above sketch the rectangular block is replaced by an elongated grain (similar to, but much smaller than a wheat grain) and that there are many grains with various similar, but not identical orientations. Not all will then produce reflections and a spread will be introduced in the distribution of the oscillation vectors of the outgoing waves of light that hits them.

Although the fundamental properties of polarised light waves of different wavelengths are the same, technically their detection and measurement requires different instrumental setups. I will concentrate on two examples here, namely optical and radio polarisation.

Radio waves are transported very efficiently in hollow waveguides with dimensions that lead to the creation of standing waves inside them. These waves are picked up by dipoles of a characteristic length, on which the incoming radio waves resonate. Since the oscillation vectors of radio waves can have any arbitrary direction, one dipole is not sufficient, because it can pick up only (components of) waves oscillating in the direction of the dipole. So as not to miss the complementary half of the radiation, a second, orthogonal dipole is required (see schematic below).

While two orthogonal dipoles are thus required to receive all radiation, even if it is not polarised, they can also be used to determine polarisation properties of radio waves. But how? Let us consider three scenarios, based on the schematics in the first figure on this page:

A "vertical" wave (1.), conveniently along the x-axis in the first figure above, will be picked up by the dipole in the vertical direction, also x, in the wave guide schematic. Conversely, a "horizontal" wave (2.) will be measured only by the dipole in the y-direction. Waves with oscillation vectors in any other direction, say at an angle of 45 degrees (3.), will be picked up in part by either of the two dipoles. In the case of a 45 degree wave, the split is even. For a 30 degree wave, the x-dipole would pick up a larger fraction of the incoming wave's intensity than the y-dipole. Thereby, the relative intensities measured by the two dipoles can be used to reconstruct the preferred direction of the oscillation vectors of incoming polarised waves. The intensities of the incoming waves are registered as voltages, therefore the "~" signs on the output cables from the two dipoles (~ is the sign for AC voltages).

Normally the uncertainties in the process of reconstruction of the true orientations of polarisation vectors using only two dipoles can be quite high. But most radio telescopes are mounted ("Alt-Az", for those who want to know...) such that they do not follow the apparent rotation of the sky above them, but the sky rotates within their field of view. This can be used to measure polarisation properties at many different dipole angles, thereby leading to much more reliable values on polarisation angles and intensities.

Instead of using two dipoles, in the optical domain one usually measures the properties of polarised emission with polarisation filters.

Because the data acquisition techniques for most optical observations are very different from those used in the radio regime, optical telescopes either avoid (in the case of "equatorial mounts") or compensate (Alt-Az mounts, using a rotator) for field-of-view rotation. This means that only two settings of a polarisation filter would lead to the same uncertainties as mentioned above for a non-rotating two-dipole radio system. Without such rotation, in the optical one observes with more than two filter position settings. Typically, 4 to 6 different polarisation angle settings are used, from which the properties of the incoming waves are then reconstructed.

Materials that make for very good polarisation filters are some crystals. They can have very high efficiencies in separating waves with orthogonal oscillation vectors.

What do we learn from astronomical polarimetry?

It is (hopefully) clear from the above that polarised emission is produced in environments where particles are influenced by the actions of magnetic fields. We can use the characteristics of the polarised light reaching us to deduce the properties of the charged particles (such as cosmic-rays) emitting it and of the magnetic fields inducing its emission.

Some experiments also yield information on the polarisation properties of the intervening interstellar or intergalactic medium through which polarised radiation from a background object propagates before it reaches us.

Polarised emission is investigated with polarimeters.