Back to the Emu main page

Emus have both practical and spiritual significance to Aboriginal people.

Note that all Australian animal species are protected. Only Aboriginal people have the right to kill native Australian animals for personal use (or, in some specific cases, for commercial gain).

Emu meat is a delicacy and Emus are hunted for their meat. (Meat from farmed animals is available in supermarkets and butcheries.)

Emu eggs are a welcome source of food. One Emu egg is equivalent to of order 20 chicken eggs.

Emu oil is known as a very effective ointment.

The Emu features prominently in Aboriginal creation stories. A few examples are reproduced or listed here.

A stellar constellation towards the centre of the Milky Way galaxy was named by Aboriginal people the "Emu in the Sky". 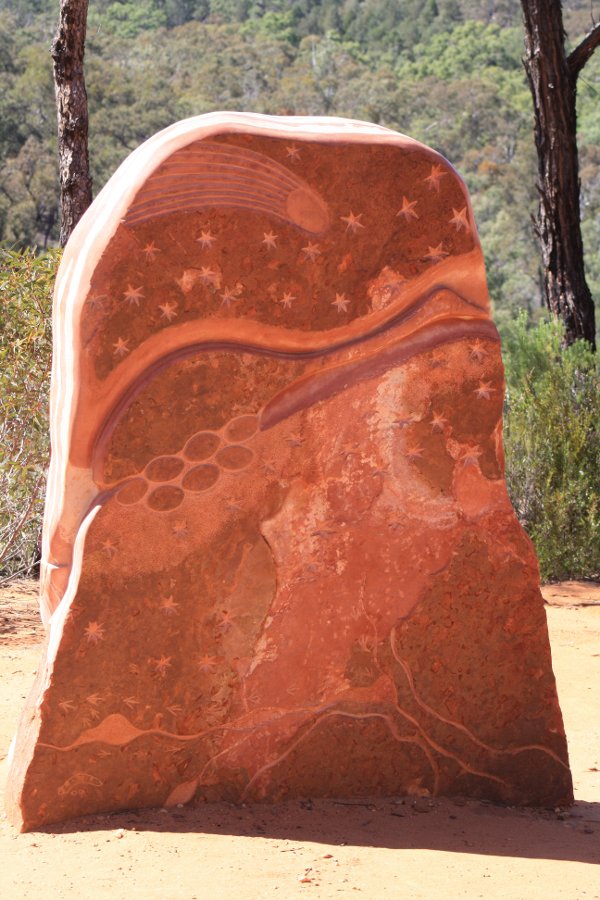 Why Brolga has a harsh voice
Brolga was out walking when she saw Emu with her many chicks. Jealous Brolga hid her only chick and said to Emu, "What a weary life, feeding so many babies! Take my advice and kill them before they tire you to death." Foolish Emu listened to the soft words and destroyed all her children. After her cruel trick, Brolga twisted her neck so quickly to call her chick that she strangled her pretty voice and was left with only a harsh, discordant cry.

Why Emu has short wings
Once upon a time, when Emu had very long wings, she flew from her home in the sky to join Brolga dancing by a lagoon. "you can't dance with such long wings," said Brolga. "Let me clip them for you." After cutting Emu's wings very short, cunning old Brolga spread her long wings, which she had hidden by folding them along her back, and flew away. Now unable to fly, Emu never returned to her home in the sky.

A. Roberts and C. P. Mountford tell the story of "The Seven Emu Sisters" (p. 68; Rigby Ltd., 1968 ed.). This story explains why Emus have only short wings and how the stellar constellation of the "Seven Emu Sisters" was created.

Disclaimer: Not being of Aboriginal or Torres Strait Islander origin, we make no claim of intellectual ownership of any of the information presented here. We merely collect facts and stories documented by others. Credits/references are listed HERE.