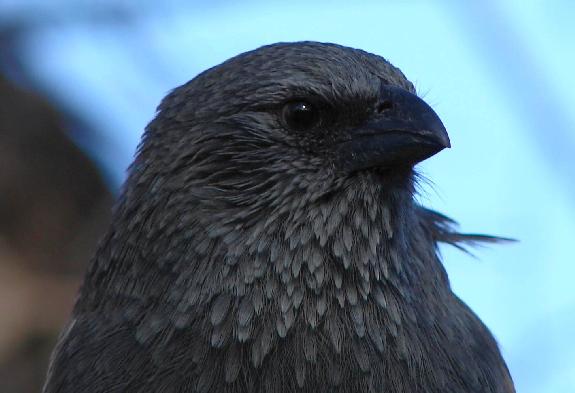 Portrait of an adult Apostlebird 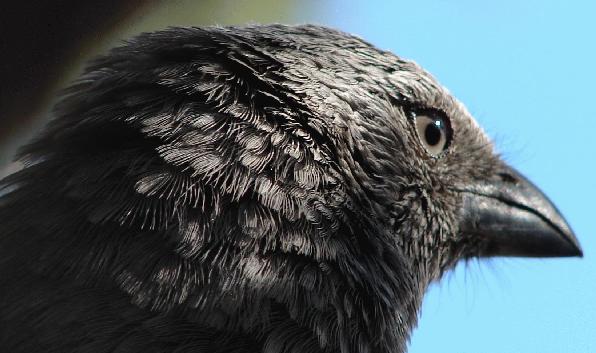 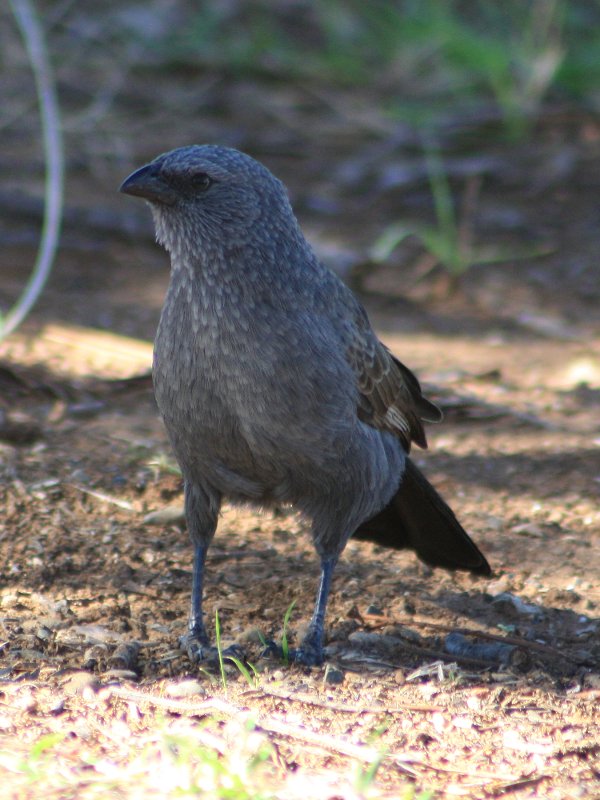 Frontal view of an Apostlebird sentry 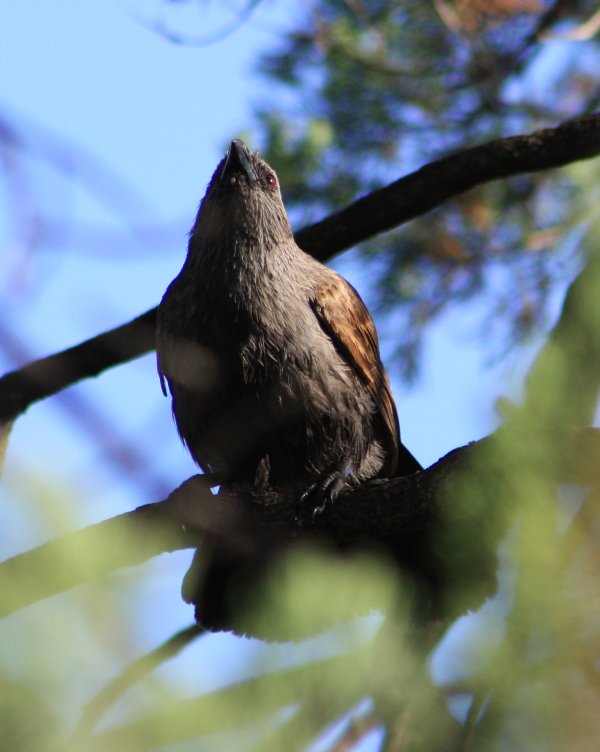 Frontal view from underneath of an Apostlebird "sentry" approaching the intruder 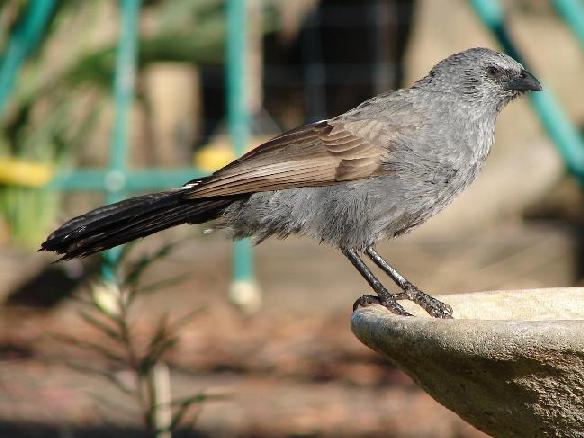 Lateral view of an Apostlebird coming in for a drink and a bath; while they are using the waterhole (usually as a group), nobody else will normally be tolerated around; note the brown colour of the wing feathers 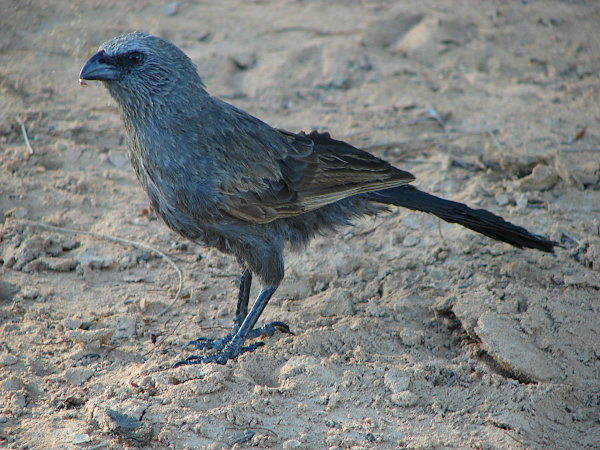 Lateral view of an Apostlebird on the ground (photo courtesy of R. Druce) 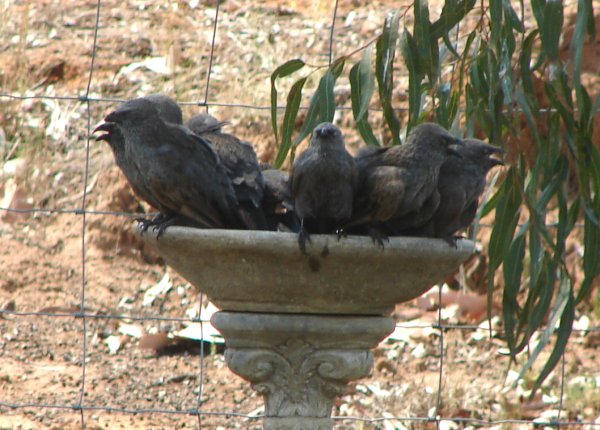 Here an example of why Apostlebirds are also called "Familybirds" 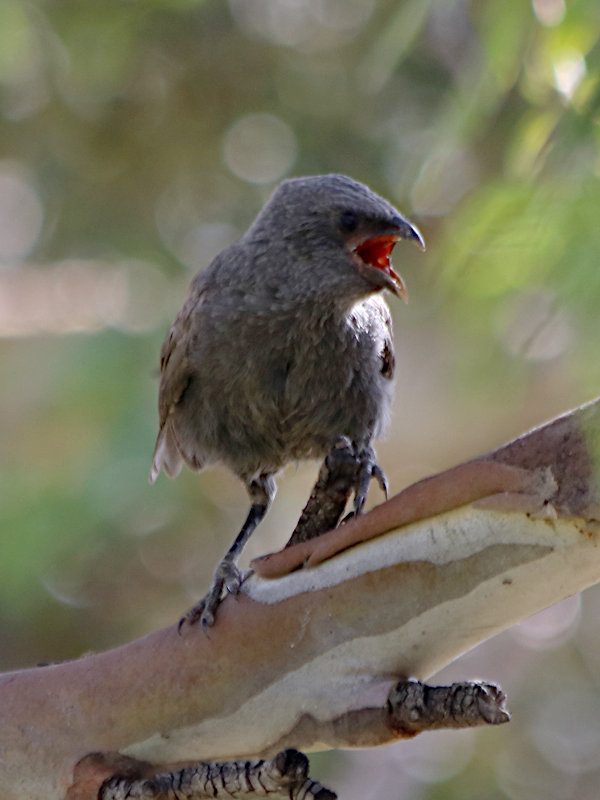 Frontal view of a juvenile Apostlebird; this is the bird whose begging calls were recorded on 2 December 2020
[Eulah Creek, NSW, December 2020]

Apostlebirds found far inland can look more reddish-brown, in accordance with the soil, than closer to the Great Dividing Range (photo courtesy of G. Schoorl) 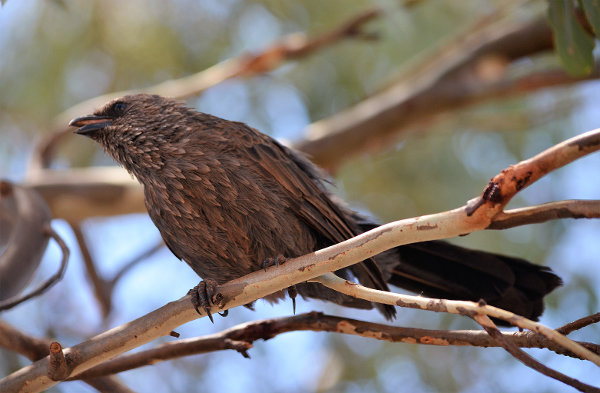 Apostlebirds found far inland can look more reddish-brown, in accordance with the soil, than closer to the Great Dividing Range (photo courtesy of G. Schoorl) 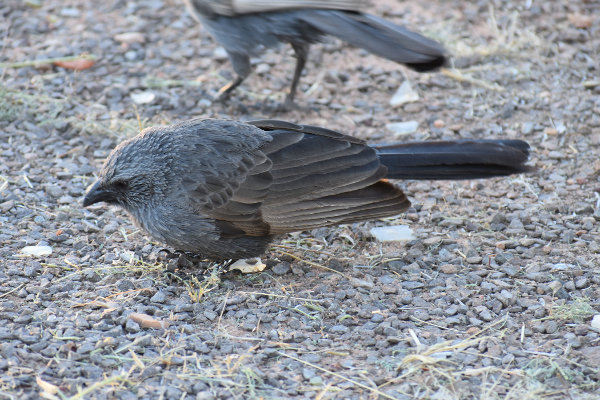 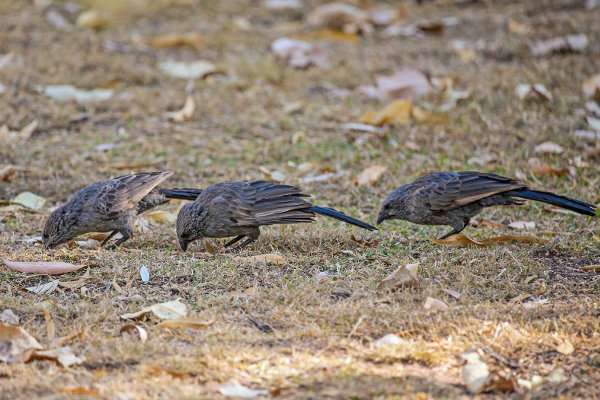 Lateral view of three Apostlebirds (photo courtesy of A. Ross-Taylor)

There can be communal breeding, with more than one female laying eggs into the same nest. All family members help care for the chicks. Apostlebirds may try to take over other species' mud nests, especially Magpie-larks'. 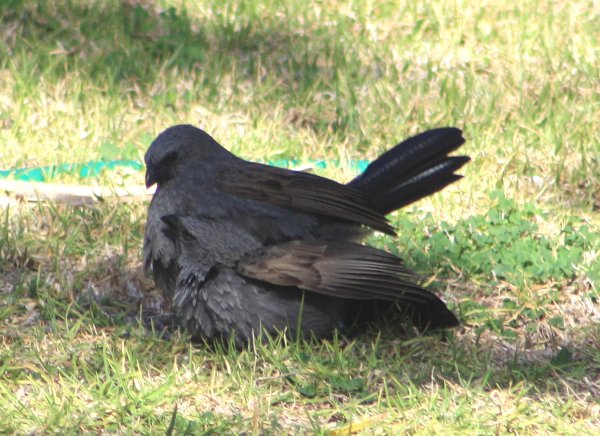 D. Johnston reports of Apostlebirds using wet cow dung in inland Australia in times of drought, when there is no mud to be found.

Mud nests are sought after by several bird species. We have compiled some more information on the (re-)use of mud nests.

Apostlebirds can often be found nesting under or near nests of other species; on a separate page we have collected some more information about clustered nesting. 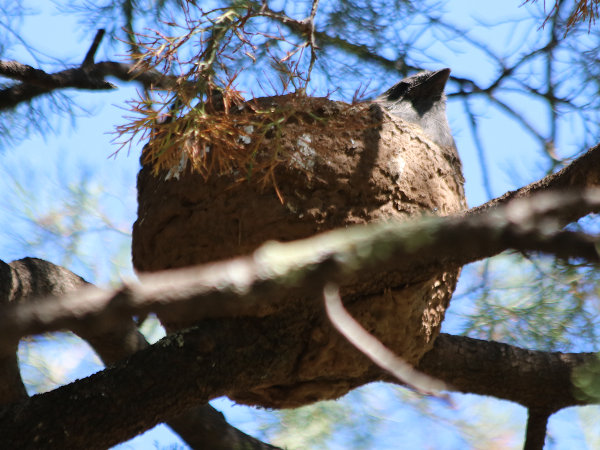 Female Apostlebird sitting on its nest incubating; this nest was very likely pinched from a pair of Magpie-larks 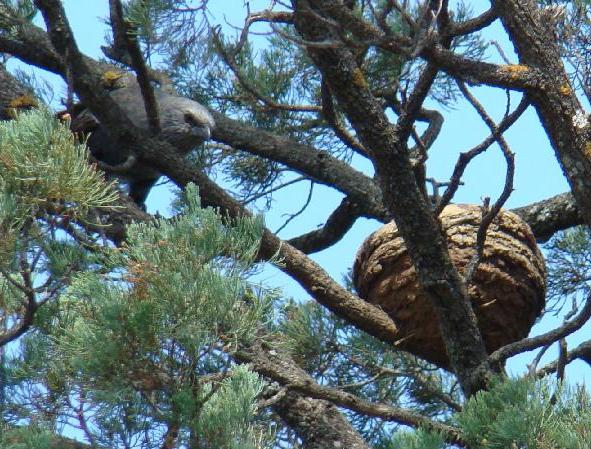 Female Apostlebird approaching its nest with a clutch of chicks in it, while the rest of the family clan remained in a nearby tree; the ring-like structure and the size of the nest compared to the bird indicate that this may be a recycled White-winged Chough nest 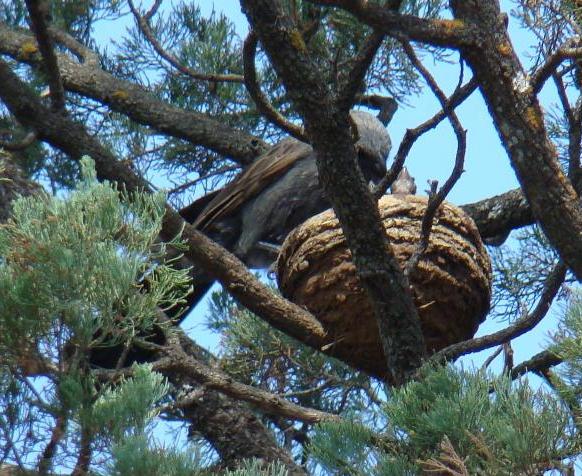 When the "all clear" was given, some tender loving care was given to the Apostlebird chicks... 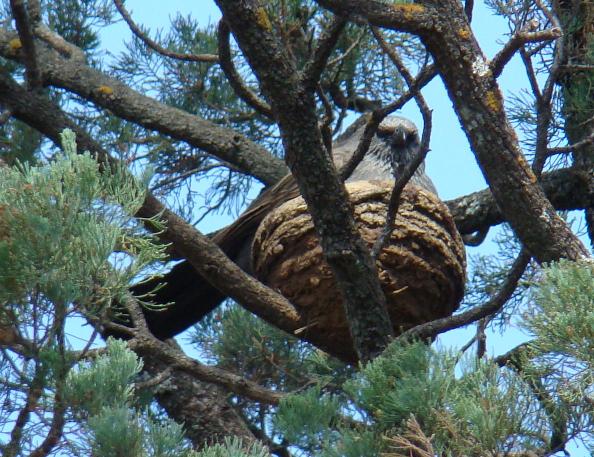 ... before the female Apostlebird sat down again to brood 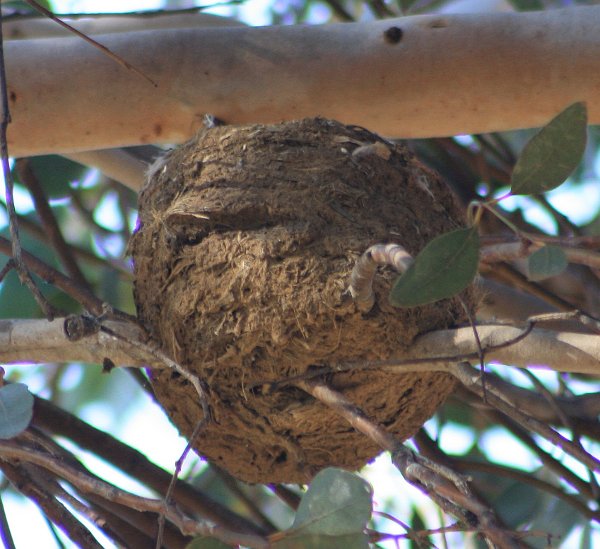 Apostlebird nest in one of the eucalypt trees on our property

It is astonishing that Apostlebirds are not found all over Australia, because wherever they show up they are so dominant that others steer clear of them. Amongst others, in the past they hustled our Bantam chickens. Amongst each other Apostlebirds are very sociable, e.g. preening each other. While foraging on the ground, groups of Apostlebirds always have a sentry, often sitting in an elevated spot, warning the others if necessary. Below an example of the sentry issuing a warning and the group's response to that. 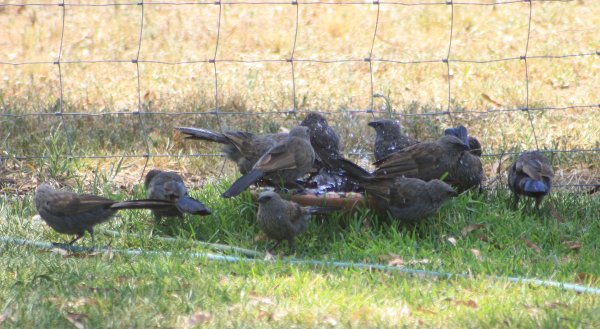 Family clan of Apostlebirds going about its business of having a drink and taking a bath; the bird in the foreground is the sentry; at some point it issued a warning call - the response can be seen in the next photo below

Here the sentry is joined by six others on the lookout, all securing the perimeter by facing outwards; clearly the call was a warning only, not an alarm, because the group settled down again shortly afterwards 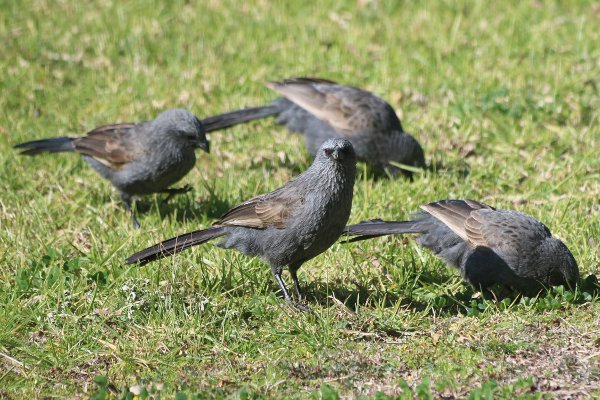 Here a sentry protecting a clan of foraging Apostlebirds

Apostlebirds are often seen by us together with Grey-crowned Babblers or with White-winged Choughs (but not both at the same time). 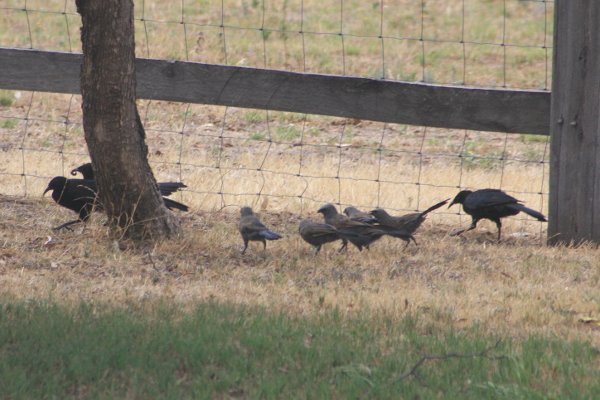 Clan of Apostlebirds huddling together while preening, even in 35 C heat

D. Johnston reports of Apostlebirds using wet cow dung in inland Australia in times of drought, when there is no mud to be found.

Apostlebirds are veritable pests towards other bird species that are nesting. They often "inspect" Magpie-lark nests, which leads to protests from their owners (sound track below). In addition, we have seen Apostlebirds making a nuisance of themselves around nests of species that are of no potential use to them, e.g. Willie Wagtail nests.

We have observed interactions between the various species of mud-nesting birds in Australia. A short page describing some of our observations can be found HERE.

Apostlebirds have been seen by us to take both seeds and small insects, which they usually find on the ground.

We have also recorded the wing beat of an Apostlebird.