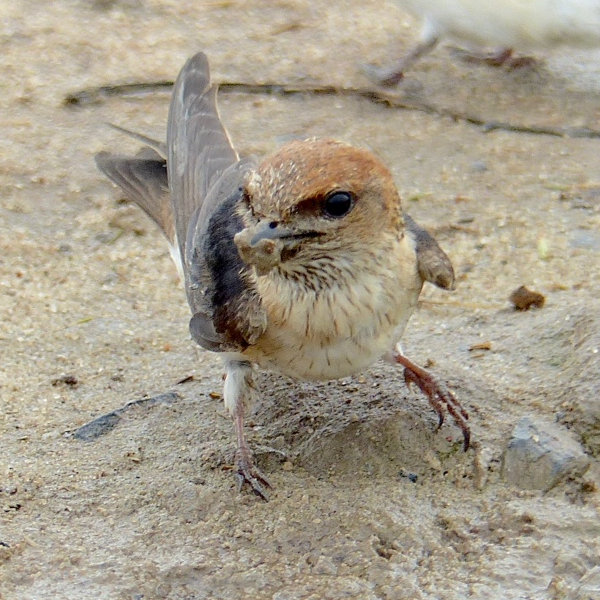 Frontal view of a Fairy Martin collecting mud (photo courtesy of B. Hensen) 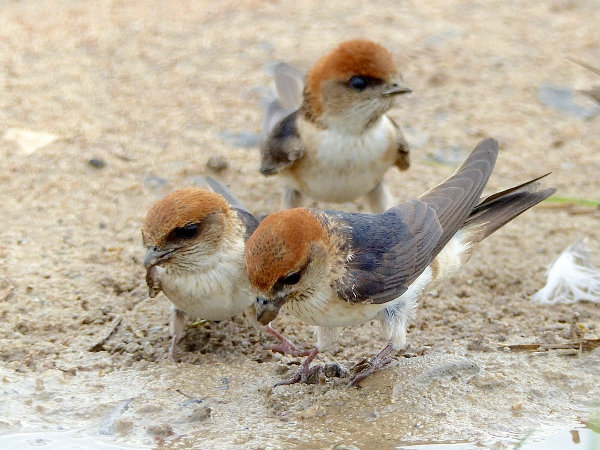 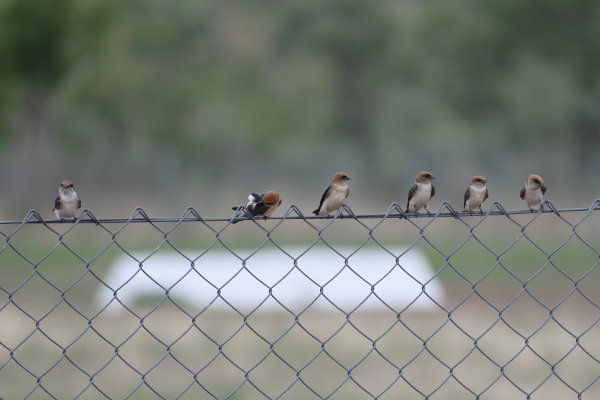 Fairy Martins lined up on a fence (photo courtesy of P. Brown) 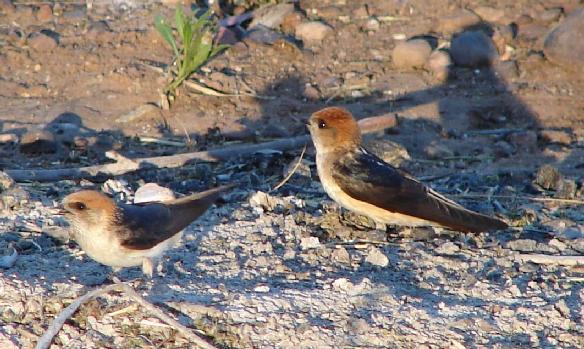 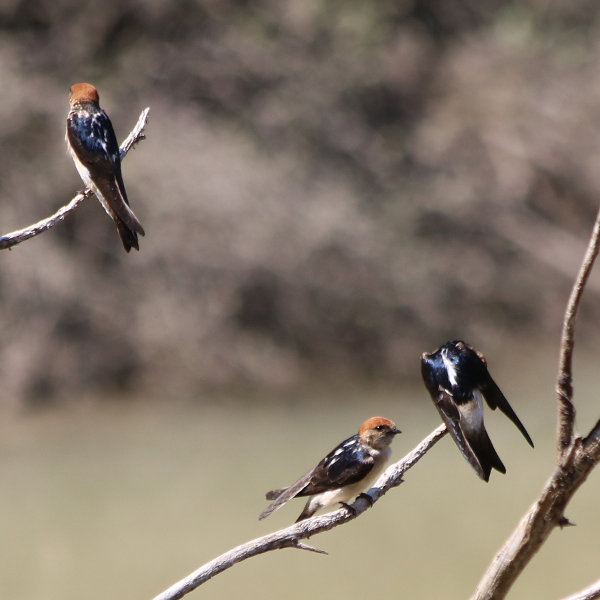 Preening Fairy Martins perched in the top of a dead tree 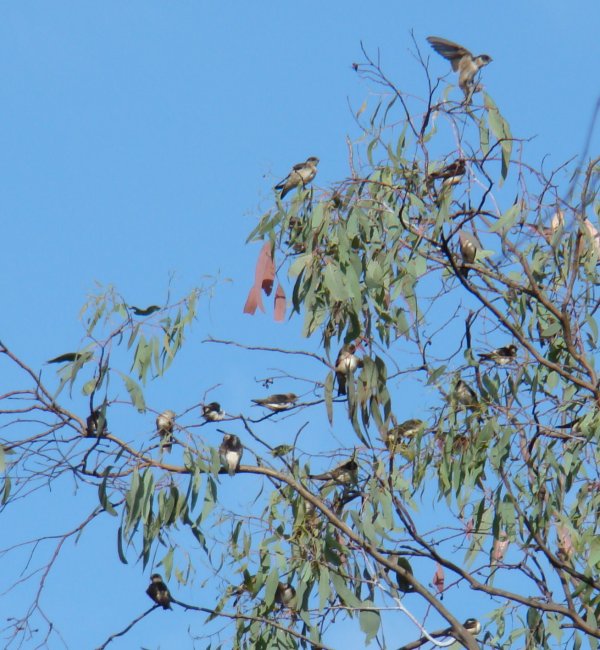 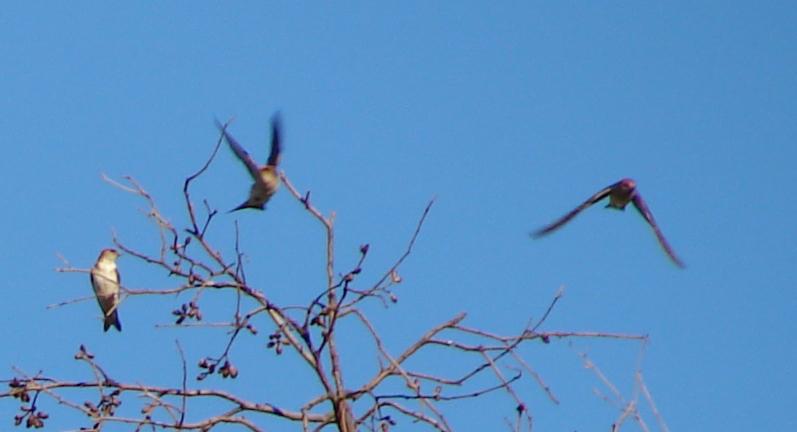 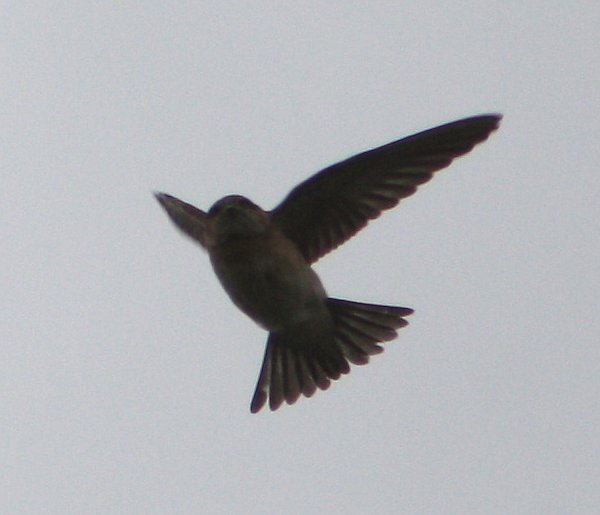 Fairy Martin in flight (left); on the left one can also see a Welcome Swallow
[Narrabri Lake, NSW, August 2010] 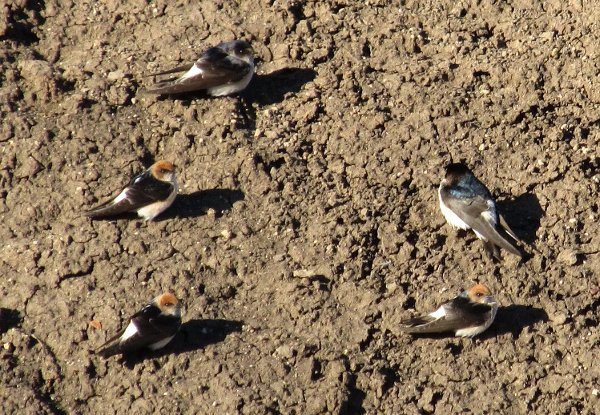 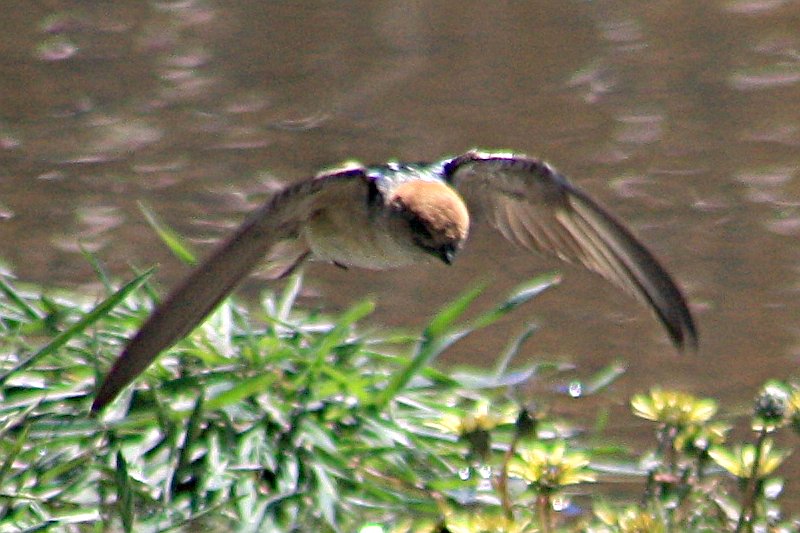 Frontal view of a Fairy Martin in low flight 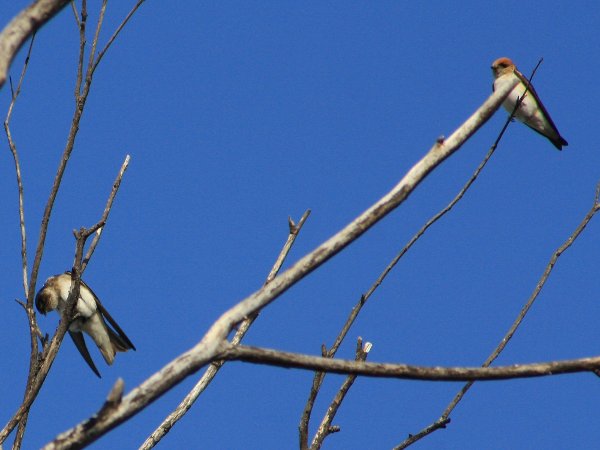 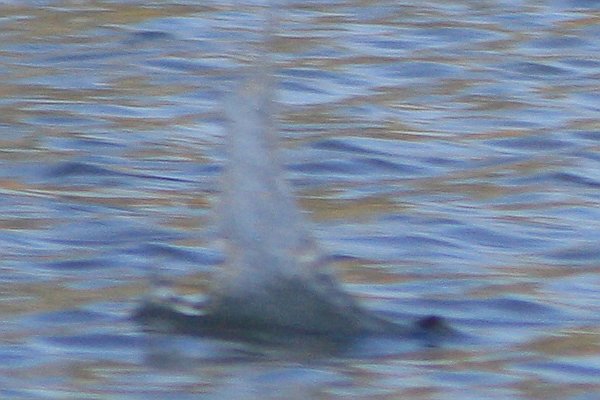 To the best of our knowledge this Fairy Martin made a little mistake; rather than scooping up water in flight like all its mates, it nose-dived into the water, only to come out again a second later 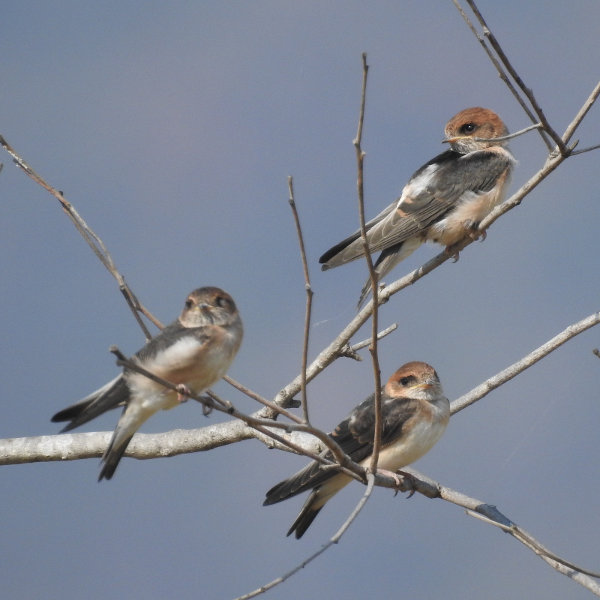 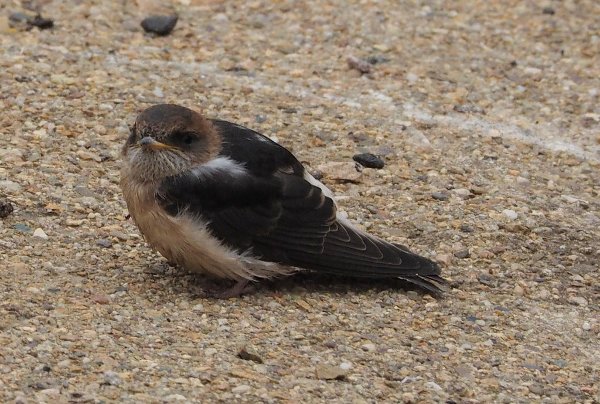 Fairy Martins can, given the right conditions, breed any time of the year. They nest in colonies. Male and female share the incubation and feeding duties. During the breeding season adult birds will roost in the nest. 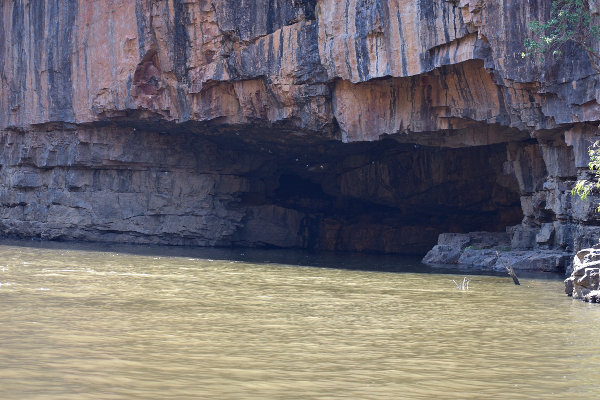 All Fairy Martin nests shown below, built under man-made structures such as bridges, culverts or awnings, are substitutes for this type of natural setting - an overhanging sandstone escarpment (photo courtesy of P. Brown) 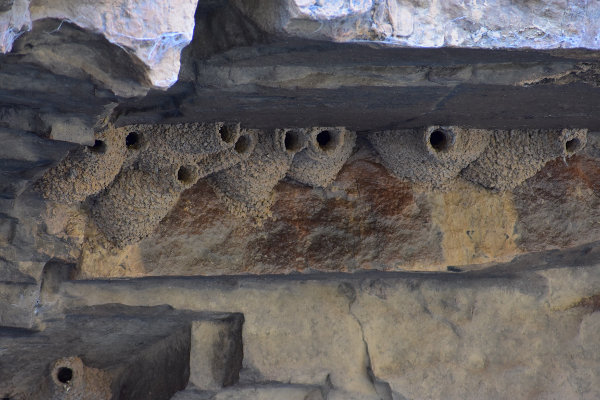 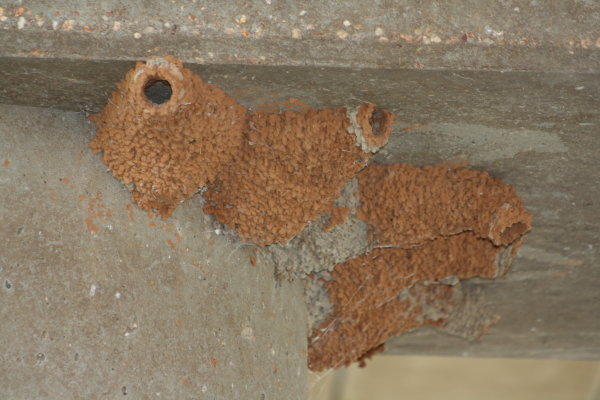 Obviously, Fairy Martin nests will be reddish when made from red soil 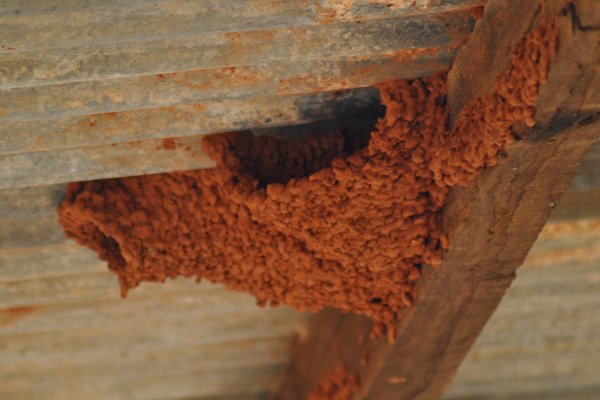 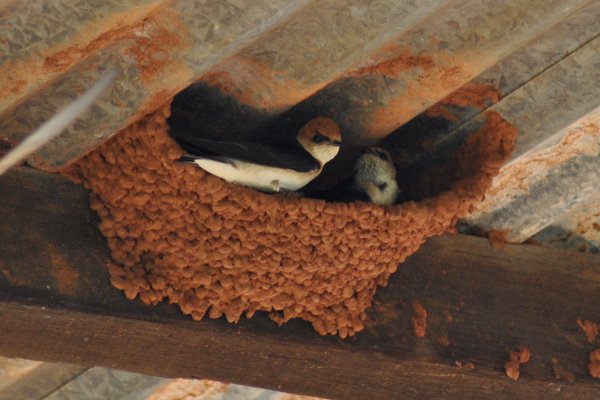 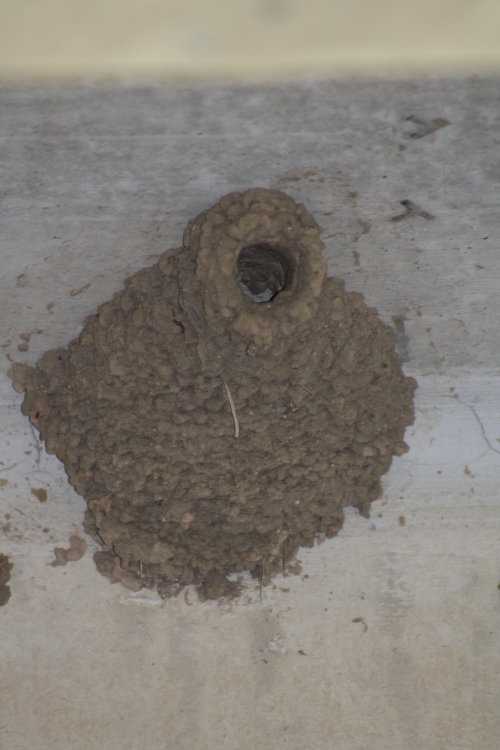 ... if grey soil is available, the outcome will look like this 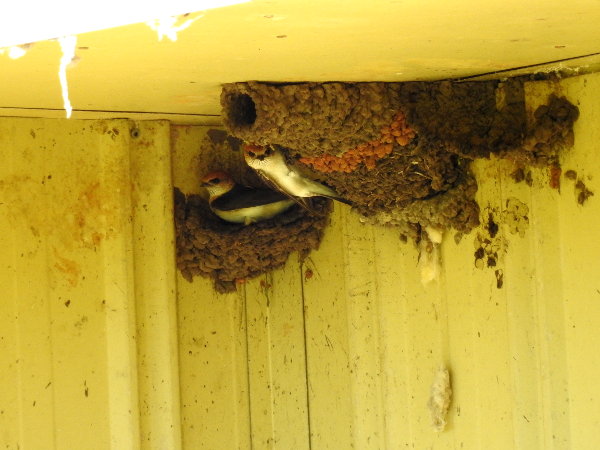 Colony of Fairy Martin nests under a bridge across the Namoi River south of Narrabri; one chick can be seen waiting outside the nest, two others are looking out the entrance 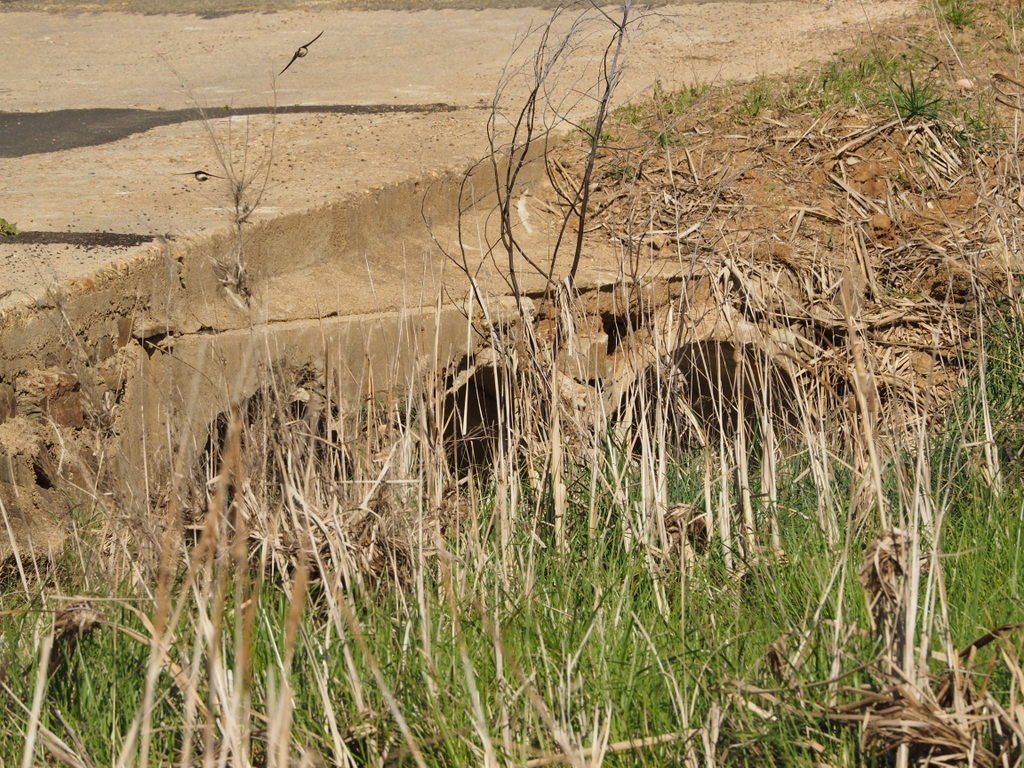 ... are located in a low and narrow culvert (photo courtesy of R. Plumtree) 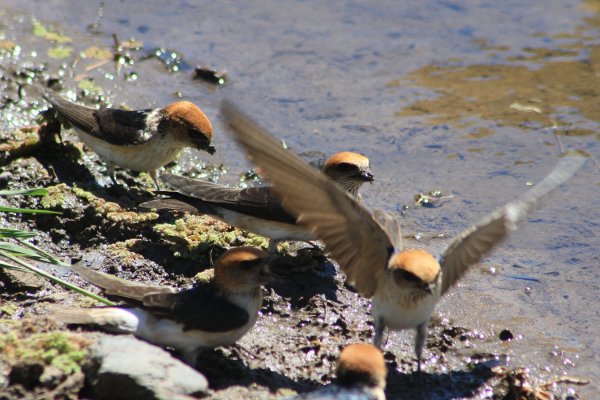 Close-up view of Fairy Martins collecting mud from the edge of a creek; these are some of the birds whose calls were recorded on 18 August 2014 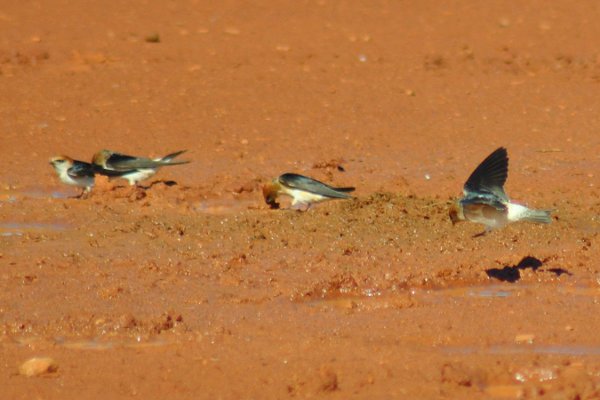 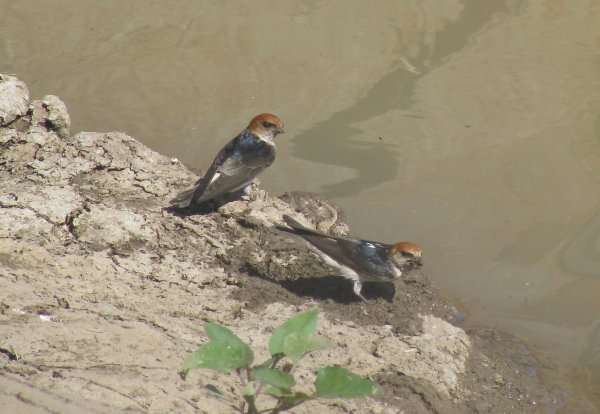 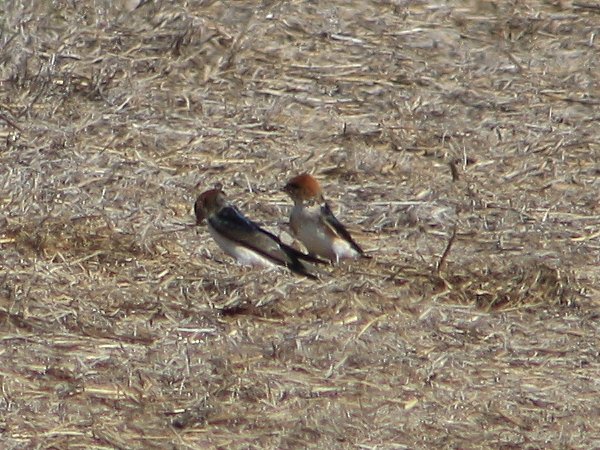 Here the Fairy Martins are after dry grass, possibly to use it as lining material; note that this photo was taken in winter 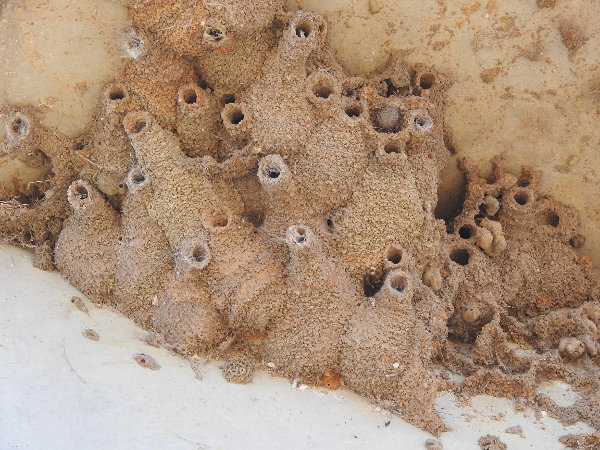 As opposed to other swallows, Fairy Martins hunt in flocks. They also go to ground in flocks of 10 to 20. It is now clear that they collected ash from the ground, probably as a binding agent for their nests (see photos above). Normally we see them collecting mud, not ash.

Fairy Martins are shier than other types of swallows and will not nest close to humans. 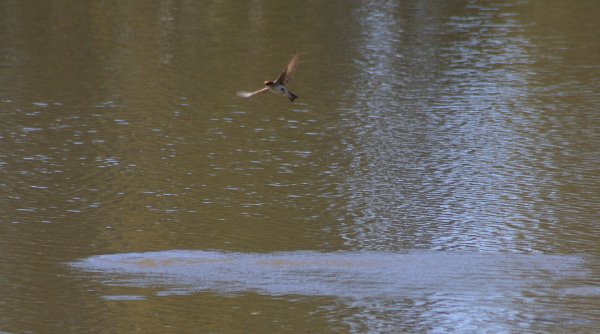 Like other types of swallows, Fairy Martins scoop up water in flight

Like all other swallows known to us, Fairy Martins are insect hunters. They feed in-flight on small insects.