Habitats around rivers and creeks in Australia are very diverse. Vegetation along the courses of near-coastal rivers is often lush and dense, whereas - often dry - river beds in the interior tend to be lined mostly with a double row of River Red Gums (and little else). Accordingly, the bird life along rivers and creeks is also diverse, depending on the nature of the habitat. This is the reason why we separate two general types of areas here: near-coastal and inland rivers. At the end of this page there are also a few examples of (semi-)permanent waterholes in inland rivers.

Note that there is a separate page on billabongs, i.e. often reed-lined and waterlily-covered (semi-)permanent waterholes of tropical Australian rivers and creeks. Rivers can also be lined with reeds, which are described briefly on the page about lakes. 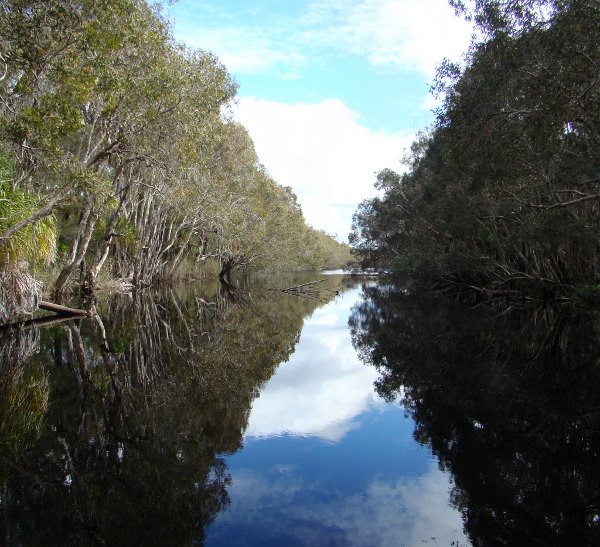 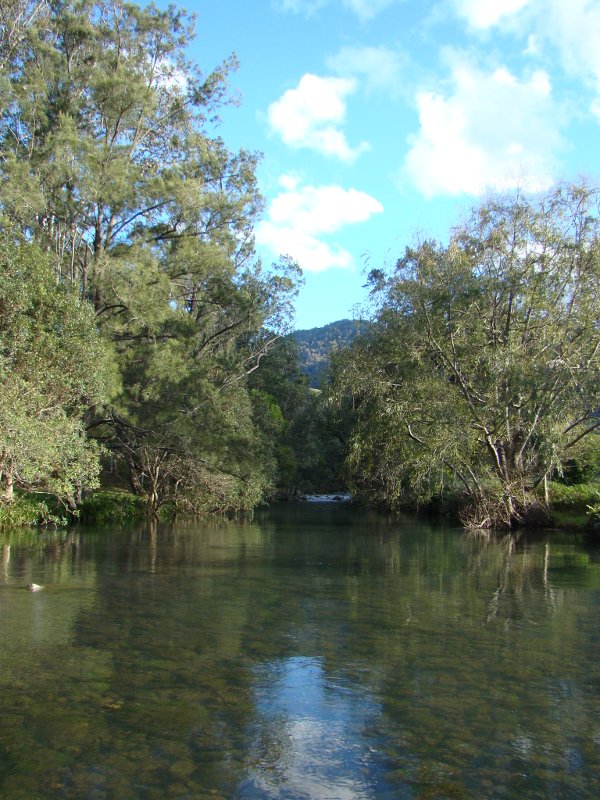 River emerging from the Great Dividing Range towards the coastline, with a median gradient - Gloucester River, NSW

Information on (semi-)permanent waterholes can be found here. 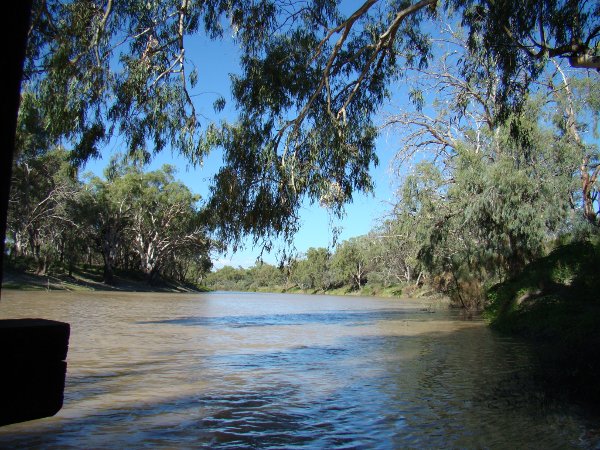 In this shot one can see how the Darling River is lined on both sides by massive trees, mostly River Red Gums; the trees' root systems stabilise the river banks 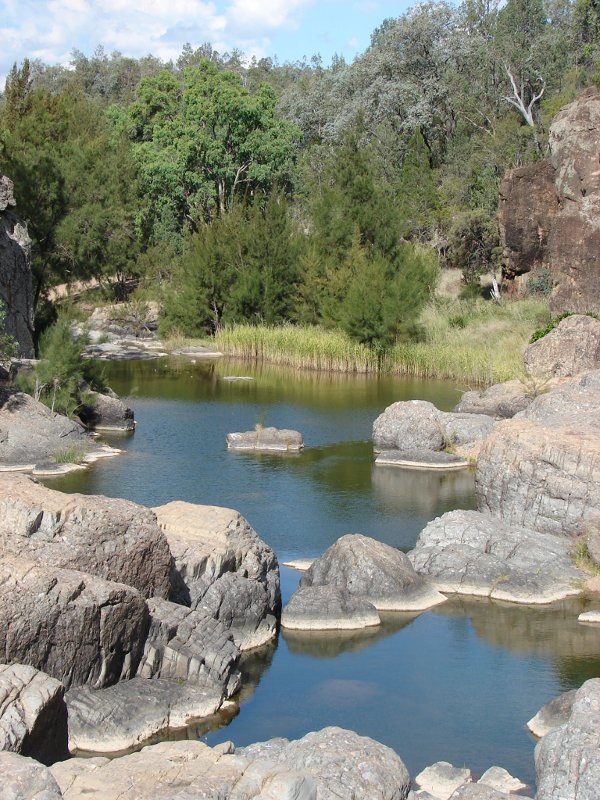 Rocky Creek, between Narrabri and Bingara, NSW, is an example of a creek in the Great Dividing Range, which usually has at least a trickle of water at the surface - this is a typical habitat for, e.g., Sacred Kingfishers 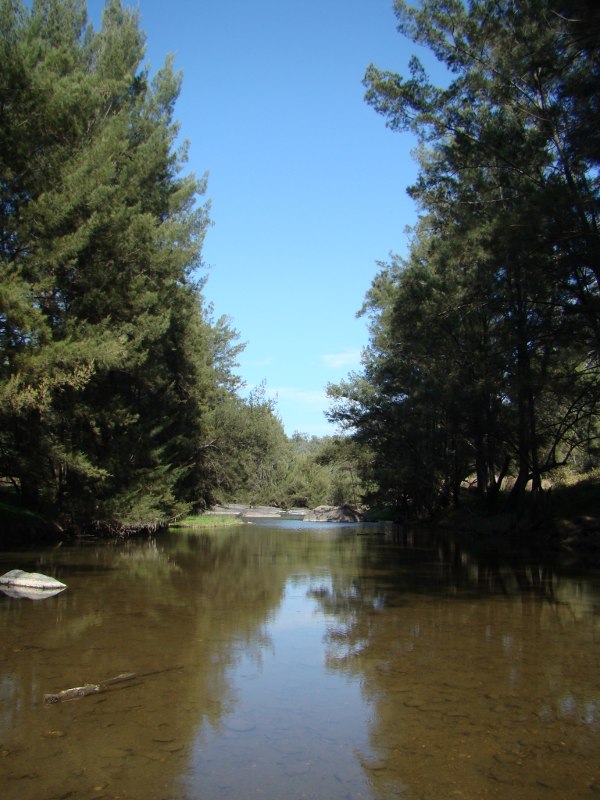 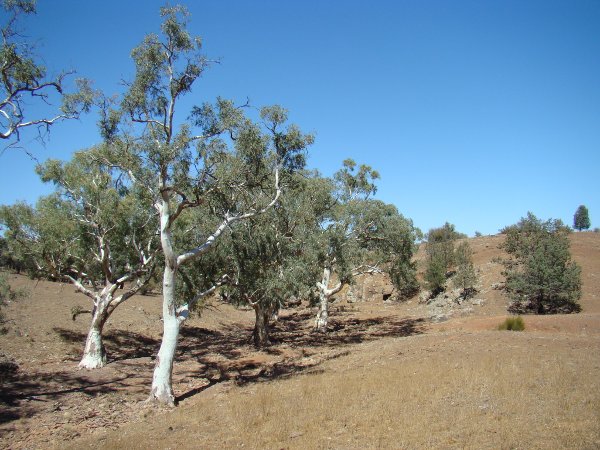 Here an extreme example of a dry creek lined with River Red Gums in the Flinders Ranges, SA 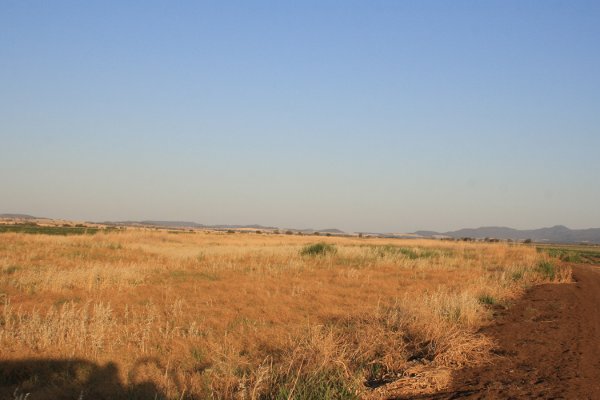 Example of a dry creek bed in an agricultural area (formerly natural grassland), overgrown with grass, reeds and weeds; a bird species found by us in this area is the Eastern Grass Owl 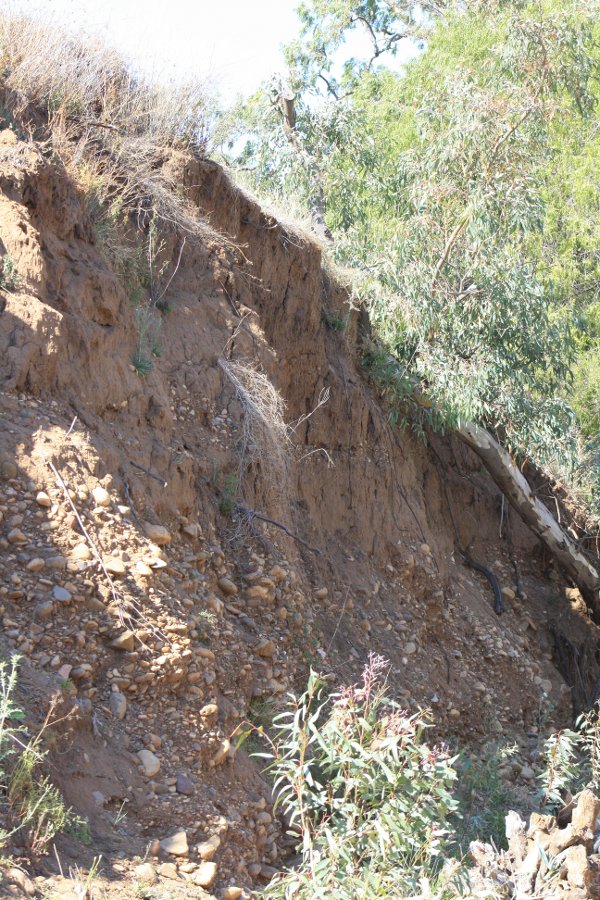 Such an eroded creek bank is not a pretty sight for landholders, but it offers several bird species an opportunity to drill nesting tunnels into the ground 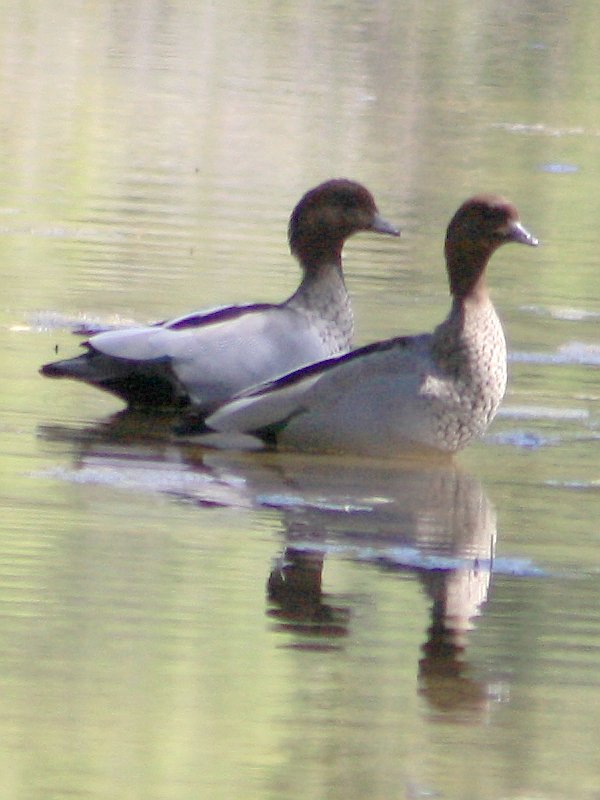 On a continent with a dry interior in which many rivers are dry over long periods, waterholes are important sources of drinking water for local wildlife. Consequently, they also attract many species of birds. Which birds will go to a waterhole or rockpool will depend on the habitat(s) surrounding the water.

Note that in common language use such inland water pools are often called "lagoons". This term is a misnomer. There is a separate page on (saltwater!) lagoons. 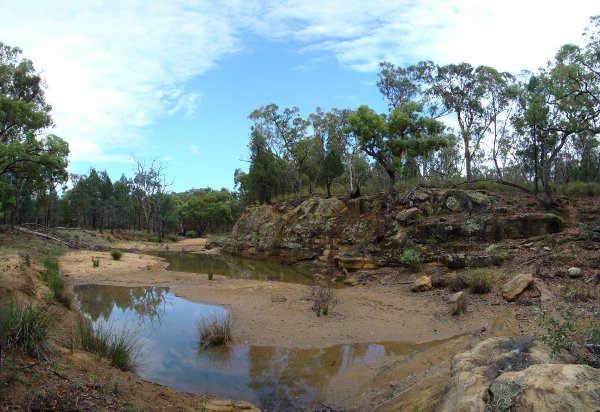 Example of a (semi-)permanent waterhole: Salisbury Waterholes in the Pilliga Nature Reserve, in inland NSW 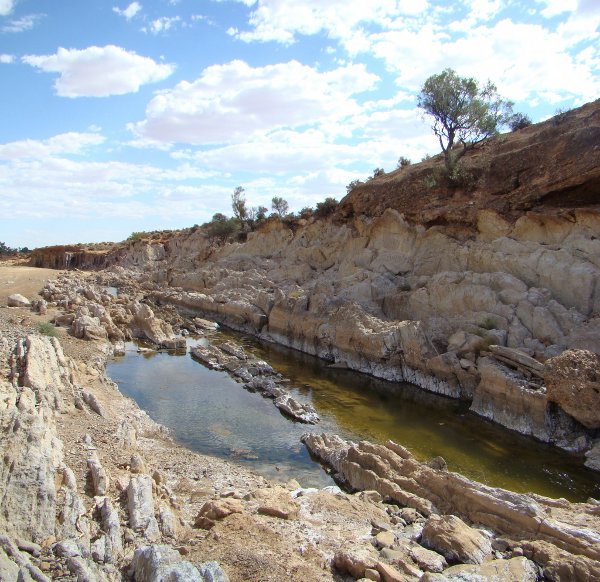 Waterholes are particularly important in semi-arid and arid evironments; here an example of a rockpool in Wirreanda Creek near Hawker, SA, which crosses country with very poor soil 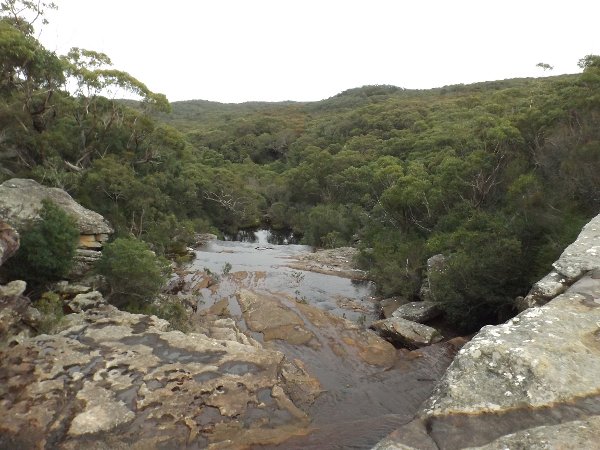 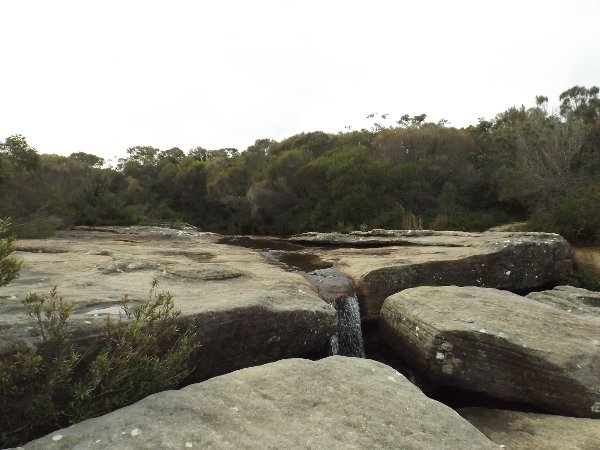 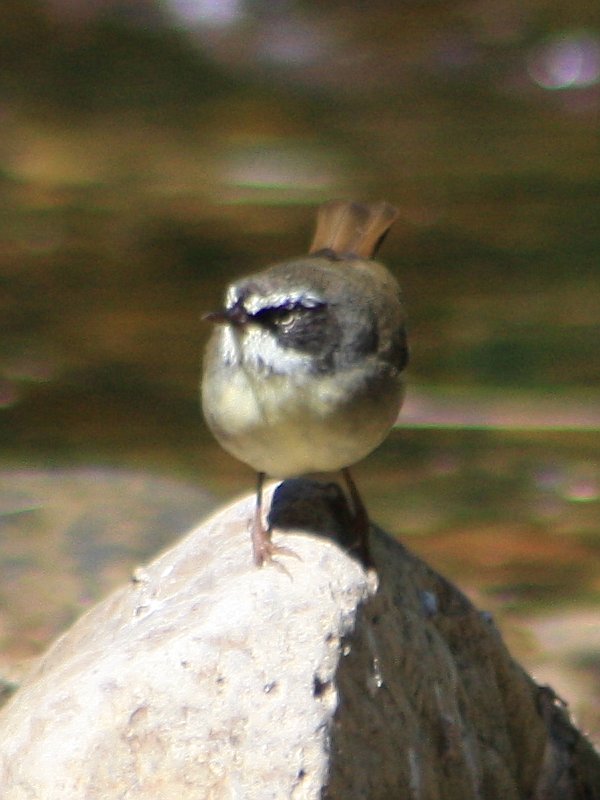 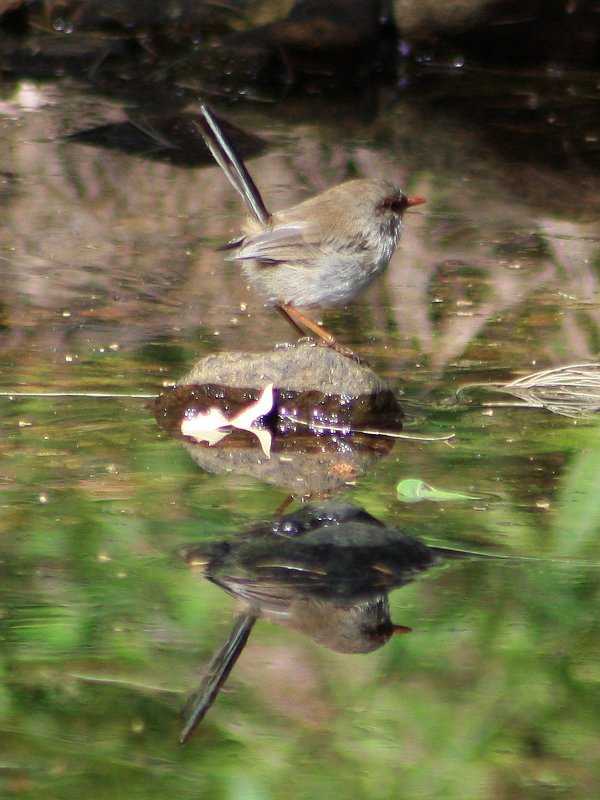 Another hunter around a rockpool is the Superb Fairy-wren 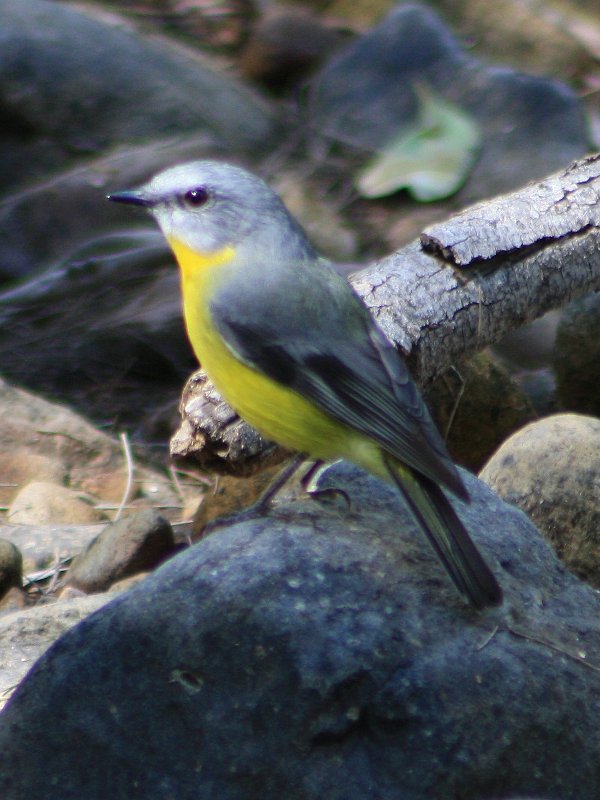 Eastern Yellow Robins hunt in underbrush along rivers and creeks, but venture out into the open too

Although hunting mostly in the trees lining rivers and creeks, such as e.g. casuarinas, Olive-backed Orioles are also seen by us regularly around rockpools
[Mt. Kaputar NP, NSW, April 2013] 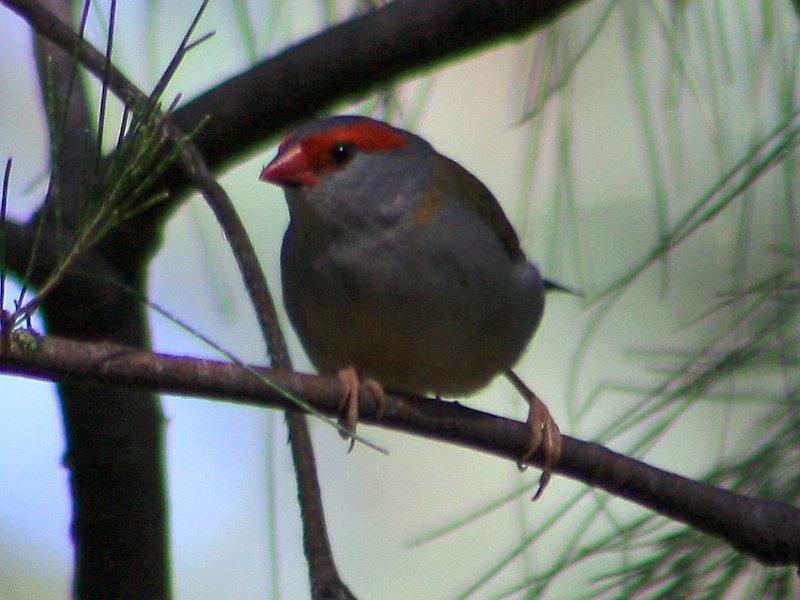 Red-browed Finches like to drink from shallow waters, such as e.g. rockpools or puddles; this one used a casuarina to approach a rockpool below
[Mt. Kaputar NP, NSW, April 2013]