Over the years, we (and others) have noticed that some bird species tend to have preferences as to where they will nest. This can happen in various configurations, of which we list a few below.

Bird species nesting under the "umbrella" of an Australian Magpie nest

We have noticed that, despite some swooping and diving at each other, several bird species will nest under an Australian Magpie nest. The species nesting (contemporaneously) under Australian Magpies observed by us in 2011 are shown above. That year all of them raised their broods successfully.

This may suggest that these species are using the protection provided by the physical strength and combativeness of Australian Magpies to shield their own nests against nest robbers. With the exception of Square-tailed Kites, Australian Magpies are strong enough to fend off the most prolific avian nest robbers, which are Pied Currawongs, Australian Ravens (and other corvids, i.e. crows and ravens).

It may be worth pointing out that in 2011, when several bird species first nested successfully in our garden, we did approach and photograph their nests. But in 2012, when the broods failed, we had not approached the nests.

Similar configurations of species nesting near or under a dominant, protecting species

A. Morris reports that Striped Honeyeaters, Crested Pigeons and Tawny Frogmouths often nest in the same tree or near Grey Butcherbird nests.

Willie Wagtails, Diamond Firetails, Zebra Finches and also Red-browed Finches can be found nesting beneath the nests of raptors, such as Brown Falcons, Whistling Kites and Wedge-tailed Eagles. 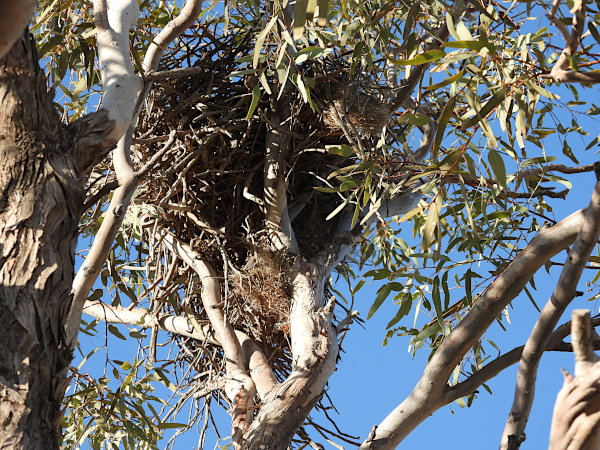 Both A. Morris and S. Grey report that Leaden Flycatchers often nest in the same tree or near a Noisy Friarbird nest.

There are other configurations of different bird species nesting in close proximity of one another, but without a species that is as dominant as an Australian Magpie, e.g. under Magpie-larks (who, if Australian Magpies were present, would nest under them).

In 2014 we observed a different configuration of clustered nesting. 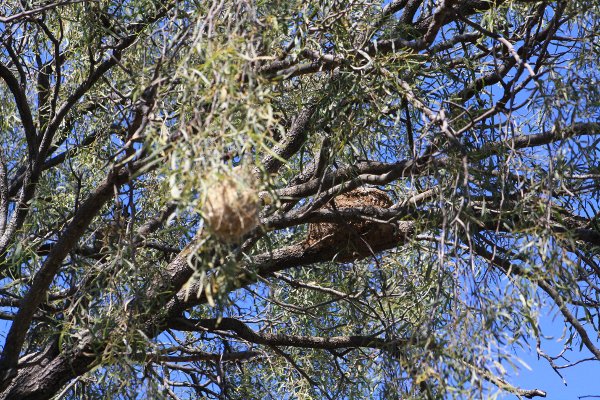 Three active nests in one photo White-winged Chough (right) Magpie-lark (left, back) and Striped Honeyeater (front centre, out of focus) 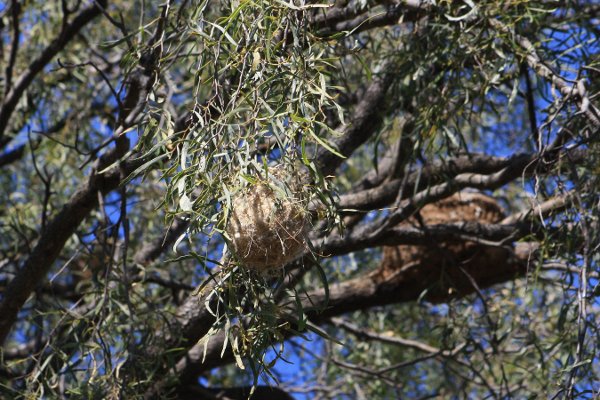 Here the Striped Honeyeater in-focus, with the White-winged Chough nest and the Magpie-lark nest in the background (out-of-focus) 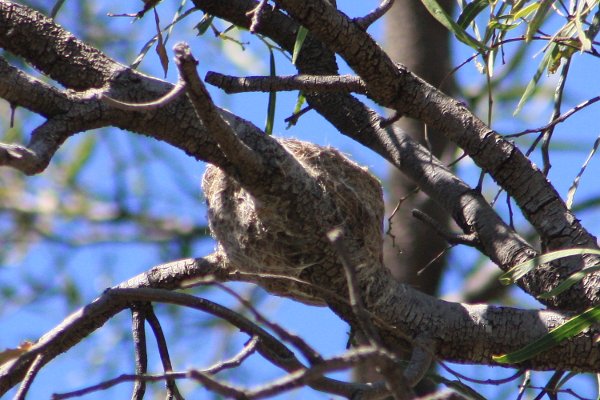 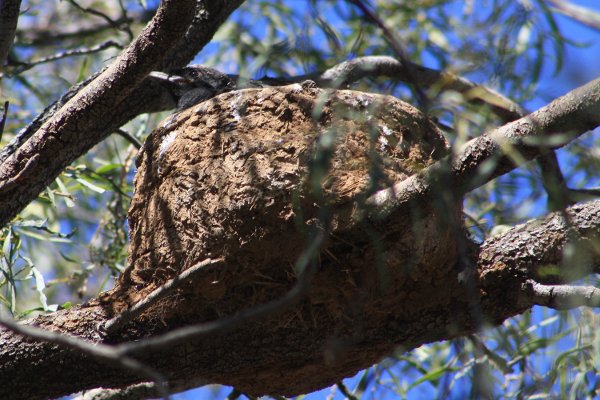 The Apostlebird nest was in a Black Pine right next to the Acacia salicina in which the other four species were nesting at the time (photos above).

The crown of the Acacia salicina tree chosen by the bird species shown above is quite open. The White-winged Chough nest is so easily visible that, when it was built, we thought this could not possibly remain undetected. And yet the birds raised at least one chick successfully. The other nests were similarly exposed and at least the pair of Willie Wagtails lost their chick/s to a Pied Currawong.

Still, despite the losses and failures, all four species involved in this attempt considered this configuation worth trying. When hearing commotions, often first one species calling an alarm, then another, and eventually three or more together, they were not fighting over possession of various nests, but warning each other of the presence of danger (usually in the form of a predator; more often than not a Pied Currawong).

In 2016, in the same group of trees as in 2014, we observed a different configuration of clustered nesting. This time, the Magpie-lark nest was the highest-placed nest. A pair of Ground Cuckoo-shrikes was exploring the suitability of a fork in a nearby tree at the same time.

A. Morris reports that White-winged Trillers are known to nest in the same trees as Australian Magpies, Willy Wagtails and Magpie-larks.

Configurations of species nesting close to one another without a dominant, protecting species

Some bird species will seek the proximity of one another, but without a top-ranking species that helps shield all below its nest. Such clustered, or semi-colonial nesting, basically provides safety in numbers.

Such clustering may suggest that various species of passerines nest in a style similar to a small colony, seeking safety in numbers (this is a known habit of White-winged Trillers, who are semi-communal nesters; both White-winged Choughs and Apostlebirds are also known to share nests within the family clans). With several nests of different species in close proximity of one another, even if there is no formal arrangement of leaving a sentry nearby, the statistical likelihood of at least one adult bird being around to warn all others of an approaching predator is higher than for one pair nesting in isolation.

There are bird species that, although being territorial, will nest in loose groups or small colonies, seeking safety in numbers with their own kind. One such species is the White-winged Triller.

Obviously, colonial breeders (such as many aquatic species) follow the same principle, seeking safety in numbers.